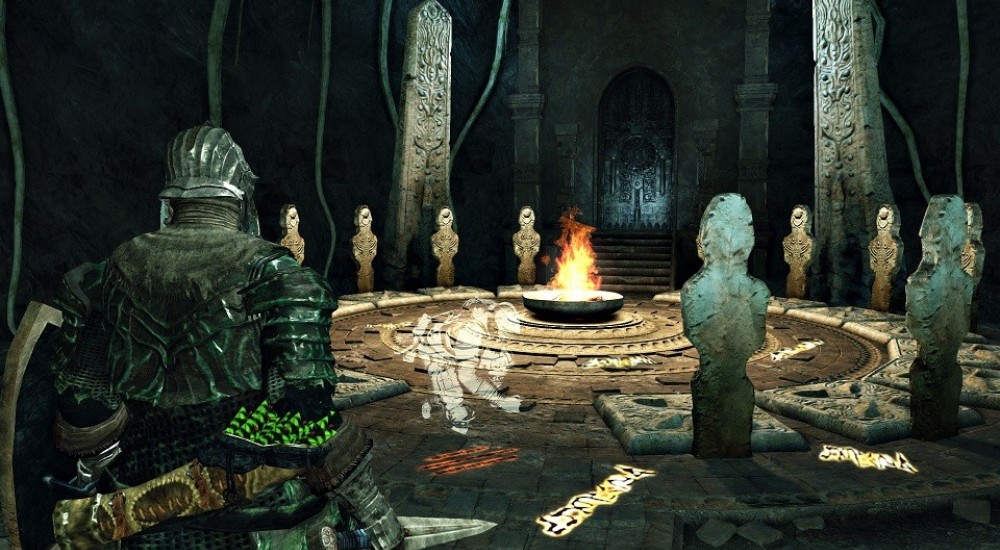 It is time to delve into the world of Dark Souls 2 once more with the first of three DLCs, the Crown of the Sunken King. Set in the city of Shulva, which looks like a cross between an underground cavern and Mayan pyramids, the DLC mixes the best parts of Dark Souls 2 and the original Dark Souls.

A few quick notes before going too far into this. First, time spent in the DLC (roughly two and a half hours thus far) was done using two characters around Soul Level 100 and that are only halfway through the main game. None of the bosses were encountered during this time. Second, the DLC can be accessed immediately following the boss fight in the Black Gulch area in the main game. Behind the Primal Bonfire there is now an area that can be activated by an item placed in your inventory automatically when the DLC is purchased. This will teleport you into the DLC and bonfires discovered here do allow you to travel back and forth to the main area of the game. Finally, these impressions are based on the PC version of the game. Two codes were supplied by the publisher for review purposes.

Your first view of Shulva is rather impressive and, much like many of the areas in the first Dark Souls, the area is almost completely navigable. You look down and see a pool of water with some shapes moving around in it. Sure enough, you’ll wind up there. In the distance, a bridge connects the main central temple with an off-shoot platform. You can go there, too. Unlike so many of the normal levels in Dark Souls 2, Shulva isn’t simply a transition from one area to the next without any real sense of what goes where. It’s interconnected and vast, a happy throwback to places like Undead Burg or Anor Londo. There are shortcuts to discover that will lead you back to an earlier part in the level, which are a big help, and there’s a sense of permanence in the changes you make to the area.

Many of those changes come in the form of various platforms that can be lowered and raised with switches. These platforms provide a little puzzle-solving aspect to the game as there are plenty of items and areas that can only be accessed by finding the right position for a platform and when to jump on it or on another one. The one catch to these is that they can only be activated by the host player. Summoned shades engaging in jolly cooperation cannot trigger these switches to shift the platforms, no doubt to ensure the solution to some of these problems aren’t too easy. That’s ok, as there’s plenty of other things to make it a more difficult journey. The overall feeling to Dark Souls 2’s content was difficulty through numbers. More enemies to fight in one area, more boss fights with multiple foes, just more. Much of that same mentality pervades throughout the DLC where enemies are clustered into groups of three or more, and pulling just one away from the rest isn’t feasible. Fortunately, you can summon a friend or two as early as the first bonfire and they can trek with you throughout most of the area (there was one part where a grey fog door prevented us from going as a group, but I could continue solo).

Having at least one person, be they an existing friend or just a friend you haven’t met yet, along greatly helps with many of the encounters to make it easier to manage all of the enemies that get tossed at you. It is entirely possible to clear all of these without any additional support, of course, but a few of the enemy groupings feel like the developers either decided to be particularly sadistic this time, or wanted you to be summoning some help.

The other carryover from the main game that’s present is the plentitude of bonfires. Thus far, I’ve found four regular bonfires (including the initial one at the start of the area) and one hidden one. Each of these are usually placed in such a way that it breaks up the larger whole of Shulva into easier to manage sections. This works really well for clearing through with a friend if neither of you have a great deal of time to spend, or if you’re swapping back and forth on summoning to progress each person to the same point.

One of the criticisms I’ve had about the core experience of Dark Souls 2 is that the content was a lot more linear than in the first game (and Demon’s Souls). That, combined with the abundance of bonfires and early access to fast-travel took a lot of bite out of the game. I still love it to death, but it definitely felt like it was missing something. The Crown of the Sunken King DLC goes a long way towards rewarding veteran players with challenging content, and level design that more closely echoes the first Dark Souls than any of the other areas in the game. The winding, maze-like areas chock full of secrets and eventual shortcuts are rewarding to explore. Though there are areas like Jason described where there are enemies in great quantity, there are also stretches with fewer enemies, and mournful ambience kicks in to keep you on your toes.

An ill-equipped player will not fare well in Shulva, as almost every enemy you’ll face can quickly poison you or degrade your equipment rapidly. You’ll want to bring a few sets of weapons at the very least. Here’s a pro tip: if you see a set of armor radiating a red aura, you want to break it. Just trust me on that one.

If this is the caliber of content that the Dark Souls 2 Season Pass gets you, it’ll be well-worth its asking price. Since this ain’t my first Souls rodeo, I appreciate the stiff challenge.

Final Thoughts: Anyone looking for more Dark Souls cannot go wrong with this DLC. A new place to explore, new enemies, and new gear. It’s a good blend of what’s best in Dark Souls 2 with the connected world/exploration of Dark Souls. Content is accessible once Black Gulch has been cleared, though the enemies and equipment feel more geared towards end game characters.