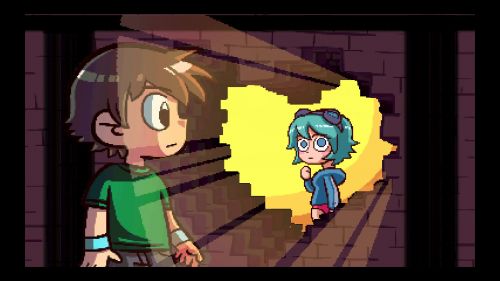 Whatever you do, don’t delete all of your hard earned Scott Pilgrim vs. The World data off of your hard drives just yet, folks. It looks like this game will be receiving its long awaited DLC after all, having almost been swept quietly under the rug.

Fans of this retro-style, beat ‘em up, XBLA title have been patiently waiting their promised DLC that had previously been projected to arrive in fall 2012. From this update, players would finally have the chance to play an online multiplayer mode and be able to choose Scott’s roommate, Wallace, as a playable character (a fan favorite from the comics and movie). But after almost 2 years of being available on the Xbox Live Marketplace, and with no signs of the DLC arriving any time soon, people have been questioning the existence of the add-on entirely. The new DLC would feature a playable Wallace, the dark haired guy on a date with a Scott look-alike.

With the world ending tomorrow and no word on the DLC, it’s understandable that people wanted to know if the DLC is even in development before the imminent doom arrives. Luckily, creator of the game, Bryan O’ Malley, has opened up about the rumors and has stated via a tweet that the DLC has not been forgotten:

There’s a rumor going around that the Scott Pilgrim video game DLC from Ubisoft has been cancelled. Status: FALSE.

Originally, O’ Malley and his team were going to scrap the DLC due to lack of interest in the community. However, they have since reconsidered this after a large amount of fans spoke up about receiving the update and their continued love of Scott Pilgrim vs. The World.

At the moment, there’s not very much info to go off of, and a date for the DLC’s arrival is still up in the air at the moment, as Ubisoft hasn’t responded with any sort of development plans for the update. Still, at least the industry got a small update on the situation before having to accept its abandonment, forgetting that it was ever happening in the first place, and gamers should be thankful that couch co-op won’t be this game’s ultimate fate. We look forward to Scott Pilgrim’s next chapter in co-op, whenever that may come.