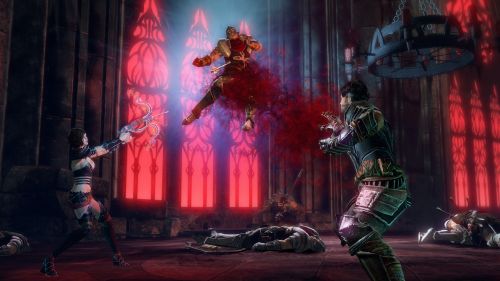 After being pushed back a few months, Blood Knights has finally reached its final days of development from DTP Entertainment and Deck 13. Coming this February to XBLA, this Action RPG will kick off the year with a bang on many levels, and for a good price!

A downloadable, vampire RPG with “hack & slash” components, Blood Knights looks to satisfy all with a hunger to kick Edward Cullen’s sparkling ass and take names. The setting takes place during the legendary war between the races of men and vampires, having one to two players control a male vampire hunter named Jeremy or his blood-bonded, vampire companion, Alysa. This game will make a good game to go along with Van Helsing if you’re into the vampire lore, or in need of a break from Diablo III. At first, Deck 13 announced this game to take place during the more thematically appropriate month of October on Halloween day. However, more development time was needed and the game was pushed to December. This being the second bump of the games release day, Deck 13 has produced a trailer and its (hopefully) final retail distribution announcement, set for February 20th, 2013 and will run at 1200 Microsoft Points. With all that taken care of, watch Blood Knight’s latest trailer below describing the details: