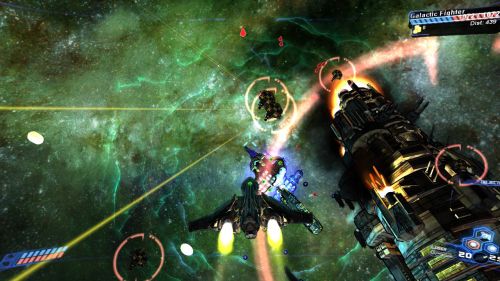 Let's face it, space combat games are a tough genre to find anymore.  Thanks to the indie movement though, we're seeing a slight comeback in a genre which once features games like X-Wing vs Tie Fighter, Wing Commander and many, many more.  This week there's an indie release sneaking out from upstart developer Wraith Entertainment.  The game is called Dawnstar and it has a lot of potential.

Dawnstar promises to bring back some of those fond memories of space flight games of years past and mix it up with plenty of loot, plenty of trading, and even plenty of co-op.  The entire 20 mission campaign in Dawnstar is playable online with up to four friends as you battle an evil intergalactic mafia.  The missions themselves are story based with comic book style cutscenes and even a decision system that affects how the game and story plays out.  Will you be a heroic pilot or a slimey smuggler?

Dawnstar is set to launch at $10 and will be available on Desura, GreenManGaming and GamersGate.  You can also vote for the game on Steam Greenlight.