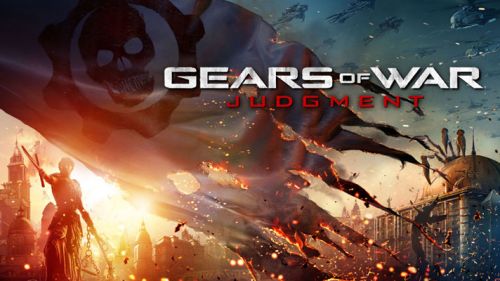 Believe it or not, we're only a few months away from a new Gears of War game.  Gears of War: Judgement is the trilogy's sequel and is set to release on the Xbox 360 in late March, and like any good release, there are pre-order bonuses that go along with it.

First up is the Microsoft Store - which really came through during the holidays.

Pre-order Gears of War: Judgment and receive a key code to download a special weapon, the Classic Hammerburst, and an exclusive playable character, Alex Brand. The Classic Hammerburst was the standard-issue assault rifle of the Locust Army. Originally designed to deliver a six-shot burst, giving the Locust a decisive edge during Emergence Day, this highly feared and effective weapon is now exclusively yours when you pre-order Gears of War: Judgment. Popular Gears of War comic book heroine Alex Brand—playable here for the first time ever—is a tough-as-nails COG Sergeant who fought many battles against the Locust as a member of Foxtrot. Despite Alex’s fierce demeanor, she's extremely loyal to her fellow COG and will do anything to protect them. This Microsoft Store exclusive Alex Brand Multiplayer Skin will let you play as Alex in competitive multiplayer matches in Gears of War: Judgment.

If Amazon is more your game, you can get a similar set of bonuses, though instead of Alex Brand you'll get a "young Dom" skin.

Canadians gamers are even luckier, preordering from GameStop / EB Games you'll get both sets of skins and the hammerburst.

EB Games Exclusive bonuses:
"Young Marcus" character skin  Decorated war hero Marcus Fenix is the legendary leader of Delta Squad, a small group of COG soldiers responsible for saving mankind from destruction at the hands of Locust and Lambent forces. This exclusive character skin takes Marcus back in time, six weeks after the end of the Pendulum Wars, and during the chaos of Emergence Day--a time before he was hardened by his long imprisonment. This exclusive character skin is for use in competitive multiplayer matches in Gears of War: Judgment.  Classic Hammerburst
The Classic Hammerburst was the standard-issue assault rifle of the Locust Army. Originally, it was designed to deliver a six-shot burst, which helped give the Locust a decisive edge during Emergence Day. Now this highly feared and effective weapon is exclusively yours when you pre-order Gears of War: Judgment.

Australian gamers get a similar pack, but instead of "Young Marcus" you'll get a "Young Anya" multiplayer skin when pre-ordering from EB Games.

So it seems there's going to be a ton of extra skins for multiplayer but you'll have no way of obtaining them all by pre-ordering.

Gears of War: Judgement will feature a four player online co-op campaign when it's released for the Xbox 360.  We currently don't have any details on its local co-op options.