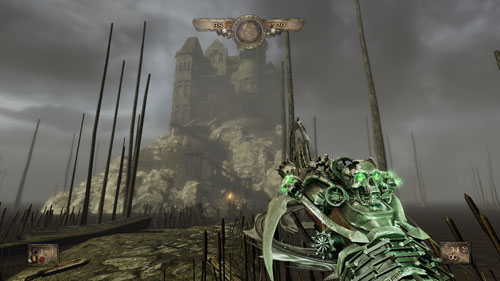 Painkiller Hell & Damnation was released last year on the PC, rebooting a franchise that old school shooter fans had fond memories of.  While it wasn't the greatest shooter we played, the two player co-op gave it some legs and added to the chaos that was set before you.  Now console gamers are going to get to try their hands with weapons like the stake gun as hundreds of enemies attempt to bring you down in this horror-esque setting.

Nordic Games have announced that Painkiller Hell & Damnation will be released on April 5th for the Xbox 360 and PlayStation 3.  There will be two versions available - the $29.99 regular edition and the $39.99 Collector's Edition.  The CE, if the same as the PC CE, should come with the soundtrack, multiplayer skins, extra tarot cards, and a making of DVD.

Painkiller Hell & Damnation features two player co-op play through the entire campaign where one player takes the role of Daniel while the other plays as the female character Eve.  You can play co-op either split-screen or online.