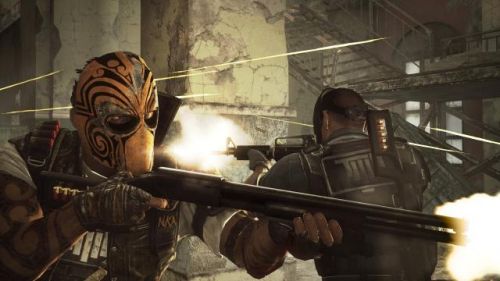 Army of Two: The Devil's Cartel is attempting to reinvent the series. According to Visceral Games' Greg Rizzer, there will be a lot less bro-y hijinks and a lot more serious business. The latest developer diary from "PWNED," EA's in-house house gaming magazine, explores some of the new features of the third person shooter. Alpha and Bravo don the masks of the T.W.O. and go to war against a deadly drug cartel. Remember, everyone they kill had it coming.

The second half of the video focuses on the revamped aggression meter from the first two games. The new Overkill meter is fueled by cooperative play. The video does a nice job of showing how you will be rewarded when they focus on working together. A scoring system will gradually fill the Overkill meter as you pull off co-op tactics. Once it's full, it's go time.

Army of Two: The Devil's Cartel supports two player local co-op and two player online co-op. It will be available on March 26th for the Xbox 360 and PlayStation 3.