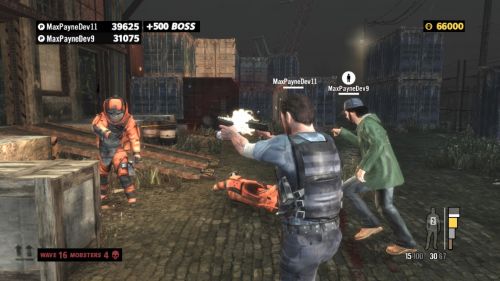 Co-op is finally coming to Max Payne 3. I know, I know, you've heard it all before. The DLC add-on, which will introduce co-op to the franchise, has been delayed over and over again since last summer. I know some of the new game smell of Max Payne 3 may have worn off, especially since it's been out since last May. I played through the campaign and thought it was pretty boss. The final act is particularly awesome. Co-op couldn't hurt.

Unfortunately, the co-op portion is its own separate mode called "Dead Men Walking." It doesn't seem to be story-based. Oddly enough, it's part of the "Deathmatch Made In Heaven" add-on. You'll play as Max and his buddy Passos, fighting off waves of enemies. As you defeat the murderous thugs you'll earn "Grit," which will unlock more ammo, new weapons, weapon attachments, and new areas of the map. I'm curious to see how Rockstar handles bullet time in co-op, since that's what got me through the game.

The "Deathmatch Made In Heaven" DLC supports two player online co-op as well as three new multiplayer versus modes: Run and Stun, Marked Man, and Time Attack. It is available now via the Xbox Live Marketplace, the PlayStation Store, and Steam for 800 MSP or $9.99. We'll have our own impressions on the co-op up soon.