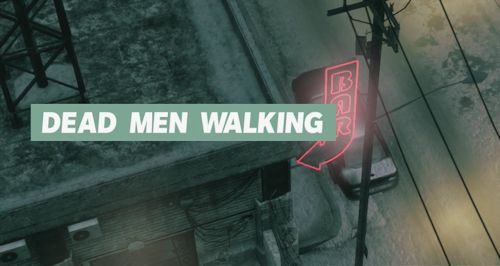 Max Payne 3 has finally gotten its long awaited co-op mode, almost nine months after release.  Called Dead Men Walking, it's an online co-op mode for two players, with one player in control of Max while the other jumps into the boots of his pal, Passos.  If you're curious about the single player, you can check out our review here, otherwise read on for co-op impressions.

The goal of the mode is simple, survive as many waves of enemies as you can, each wave adding more difficult enemies as well as increasing their numbers.  There are two maps at your disposal, Hoboken Alleys and the Tiete River Docks, with both maps featuring numerous indoor and outdoor environments to explore.  These are still arena based areas to play in, there isn't a linear path, but there is some unique mechanics at play to make them feel larger.

Max Payne 3's co-op mode offers a really unique style, making the entire scenario play out like it's part of a crime in progress with a news helicopter overhead giving the "play by play." This helps keep things a little bit fresh in terms of presentation, and actually helps keep the action moving.  At times enemies will be highlighted by the chopper's search light, helping you locate those hard to find final enemies of a wave. Along with a point system for kills, there's something called Grit.  The grit meter located in the lower right increases as you kill enemies.  This can then be "spent" to unlock doors to access new areas, unlock crates to access new weapons, and unlock health kits to refill on pills.  In a strange way, the strategy involved with this feels similar to Call of Duty: Black Ops's Zombie mode.

To actually lose the scenario both you and your partner must go down.  When your health reaches zero you'll be "captured" and placed randomly in some spot around the map.  Until you are rescued the other player will be unable to score points, so its their job to find you ASAP to keep the progression going. The combat is a satisfying as the single player and there's a good variety of enemies to take on.  The waves get mixed up every now and again with a "boss" wave and you'll want to pick up weapons off downed enemies instead of solely relying on grit unlocks.  Bullet time is also crucial in later stages to surviving, and when entering it, both players are affected.  It's advisable you let your partner know when you're getting ready to trigger it.

While the $10 deathmatch pack doesn't seem like a logical place for this co-op mode, that's where it got stuck.  The DLC is included with the season pass, so it'll be a free download for you, but it's hard to recommend a two map co-op mode for the $10 tag to anyone.  Still, if you're a fan of Max Payne 3 and enjoy the regular competitive multiplayer, the co-op is a nice addictive addition.  It's just a shame it took so long for the game to see this mode.

Max Payne 3 and the co-op DLC which is included in the Deathmatch Made in Heaven DLC is out now.  It features two player online co-op.  A code was provided by the publisher for the purpose of this article.