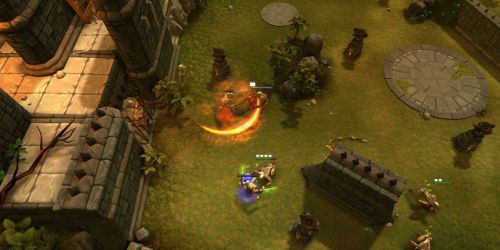 Not too long ago, though it certainly seems that way in gaming years, we spoke with indie developer BetaDwarf about their upcoming four-player co-op arena title, FORCED. The basic premise is that you're part of an enslaved people that are forced to compete in battles with the possible hope of surviving and eventually gaining freedom. Taking cues from Diablo, Left 4 Dead, and even Smash TV (in a way), the developers at BetaDwarf were hoping to get some additional Kickstarter funds to help see the game through.

They succeeded. In spades.

Asking for $40,000 to just get the game completed, they wound up with $65,000, a total that will allow them to create some extra enemies and an extra arena in which to do combat. So with that funding secured, it was time to start cracking on polishing up the existing content and get the game out the door. We recently heard from Steffen Kabbelgaard Grønning, CEO at BetaDwarf, about how things have been going, and he wanted to share with us (and all of you) a couple of videos that show things off a bit.

The first video comes directly from a play session and demonstrates some of the co-op challenges players will face. These challenges are uniquely designed to the number of players present. Thus you may enter the same arena with one, two, or three of your friends, but the goals you'll have to accomplish will change.

Here, the three players need to interrupt the central beam by getting the Spirit Mentor to pass through it. That would probably be a whole lot easier if they weren't also being attacked by enemies at the same time. No one said it would be easy, though.

One detail you may notice from the video is that each character utilizes a different weapon. One has a hammer, the other a shield, and the last a pair of blades (the first to die). Your character's abilities and skills are based on the weapon you choose in between challenges, and you're never locked into just one. Your progression/XP is also applied to all the weapons, in a way, so you don't have to endlessly grind if you decide to switch things up.

Next up is a video that gives a little more detail about some of the foes you'll face in the arena.

FORCED is shaping up to be quite the interesting co-op game, and while no specific launch date is set, Steffen has told us that they're looking to release "early 2013." Hopefully, that means we'll see it released some time in April.

They're also hoping to bring the game to Steam and have started a Steam Greenlight page to get it "greenlit." So if you have a moment, and think the game looks interesting, hop on over and give it a vote! Even if you don't have a moment, go vote anyways. We're talking about more co-op games, here!