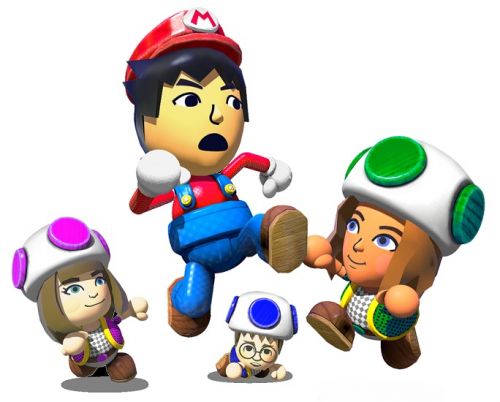 What do you get if you sell 2 million copies on the Wii U?  Co-Op!  Nintendo have released sales figures for their new console and it makes good reading for fans of co-op titles New Super Mario Bros. Wii U and NintendoLand.  Both have managed to sell over 2 million copies.  Elsewhere, sales of the console are not looking quite as rosy.

Nintendo must be a little disappointed with sales of the Wii U as they originally planned to sell 5.5 million consoles by March, but are on course for nearer 4 million.  Currently there are around 3 million Wii U consoles in people's homes, meaning that 2 in every 3 people are enjoying the co-op delights of NSMB Wii U and/or NintendoLand.

Nintendoland is the Wii Sports equivalent of this Nintendo generation and features mini games that make the most out of the WiiPad et al.  Of these games, several are 5 player co-op, as you work as a team to gazump the one player holding the precious WiiPad.  During my hands on session at last year's Eurogamer Expo I felt that NintendoLand had the most fun to offer of any of the Wii U games on show.

NSMB Wii U is another game that allows 5 player co-op.  It’s a great family title, but we noted in our review that it did have some issues.  The fact that the Wii U is selling copious numbers of these two co-op titles helps prove that our love of couch co-op is as strong as ever.

With the next generation just around the corner, what is the future for both offline and online co-op?

Will we see further integration between handheld devices and consoles, leading to development in asymmetrical co-op?

Will our online presence become more permanent allowing us to cross between games and develop our characters across multiple platforms?