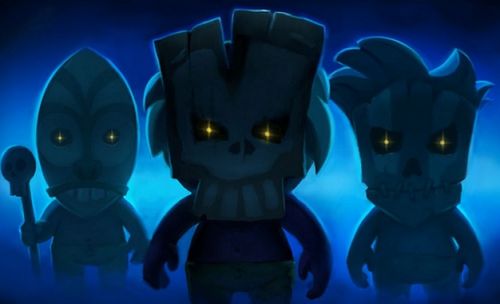 There is some good mojo in the air today as Over the Top Games have announced a brand new 4 player co-op title called Full Mojo Rampage.  Although the game is currently planned for PC only, there is a strong possibility it will work its way onto PS3, 360 and WiiU download services (or 720, PS4 etc).  You can preorder the game for $10 at the OTT site, or pay $15 on release.  More details follow.

The game is currently in closed Alpha, which means that OTT are pretty far into developing the game, but are not yet ready to show the public.  If you do decide to preorder the game you will be given early access onto the Beta, so that is yet another incentive to help this 6 person developer.

OTT have released some information about the game:

Full Mojo Rampage is a fast-paced exploration and action game that takes place within the confines of the Voodoo reality.  In this realm only the most powerful rites and powers can provide a safeguard against evil. The player controls a guardian of Voodoo, the so called “Voodoo keepers” and goes in different quests and pacts with the Voodoo gods.  In this game, players will explore random generated 3D dungeons and constantly discover new powers and mojos.

More can be discovered by visiting the OTT website.  This looks like a promising 4 player co-op title that has some character design that will hopefully make it stand out from the isometric hack 'n' slash pack.