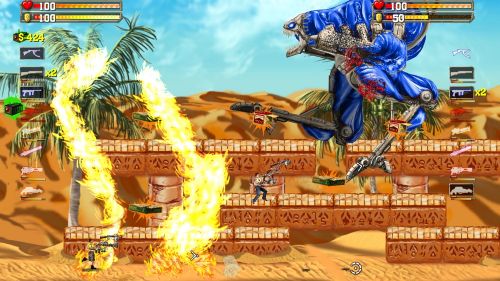 The Serious One is back in Serious Sam Double D XXL. The side-scrolling shooter will be coming to the Xbox LIVE Marketplace later this month. This gun-stacking, monster-blasting, run-and-gun, 2D adventure may look familiar, and it should. It's like last year's Serious Sam Double D on PC, only this time it's on the XBLA, there's co-op, three new letters in the title, and a whole lot more.

Today we have a new video from Mommy's Best Games depicting some of the in-depth customization of the gunstacker feature. While this video isn't quite as compelling as the gunstacker video featuring the insane rantings of my main man, Huff, it is pretty informative. Who knew there would be more to gunstacking than simply, well, stacking guns? You can stack up to six guns on top of each other for insane firepower. Throw in a co-op partner and that's like, a million guns. Or 12. Whichever comes first.

Serious Sam Double D XXL supports two player local co-op. It's be available on from the Xbox LIVE Marketplace on February 20th. It's price point is set at 800 MPS. That's $10 to you and me.