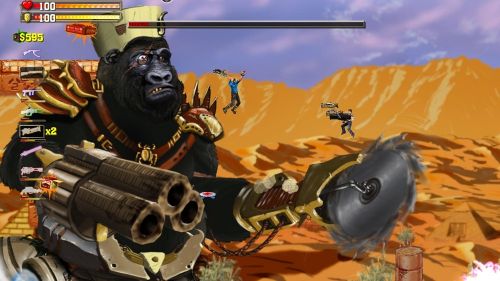 Base humor has been part of gaming ever since Larry first put on his Leisure Suit.  In many ways Serious Sam Double D XXL is just trying to keep on this venerable tradition in the form of a local 2 player co-operative shooter.  However, rather than dated and tasteless attempts at sleeping with the opposite sex, Double D is populated with giant gorillas, dinosaurs and guns, guns, guns.

DD is a revamped XBLA version of the PC game, but this time has local two player co-op over the 18 campaign levels.  A release date or price is not yet known, but the screens below suggest a very Super Contra style of game, but with more flying cats.  As Fall was first muted for release, expect this game to arrive any time soon.