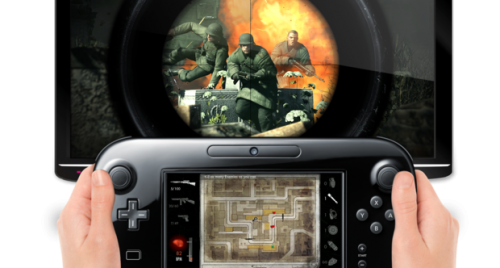 Expect some more mature titles to arrive for the Nintendo Wii U’s every growing game lineup. Recently, one of the many exciting games to come, Sniper Elite V2, has officially cemented itself as an upcoming Wii U title.

Today, both 505 Games and Rebellion have announced that they will be bringing their popular IP, Sniper Elite V2, to the Nintendo Wii U console this spring. This, of course, will include all new controls to accommodate the Wii U’s unique GamePad, and a whole new “level of interactivity” that can only be achieved with the Wii U touchscreen. This will add another title to the ever growing “mature” games found on the expanding Wii U library.

Players will enjoy the same thrilling, visceral experience as they guide American OSS agent Karl Fairburne around historical locations throughout Berlin and attempt to unravel the mysteries and dangers of the German V-2 rocket program but now with even greater tactical depth and flexibility thanks to brand new functionality through the GamePad – tag enemies and booby-traps, track enemy locations and activity, even monitor the blast radius of planted explosives – all with a glance at the touch screen and without leaving the battlefield for even a second.

Sniper Elite V2 is a match made in heaven for the Wii U’s controllers, and could only be possible on them. “It’s been a challenge to get it right, but thanks to our team and the fantastic support of our partners at 505 Games we believe we’ve brought the unique gameplay to a whole new platform,” said CEO, Jason Kingsley, of Rebellion. One thing is for sure: it will be interesting to see how much the gameplay will change converting over to the Wii U. Don’t worry folks: you won’t be aiming your weapons with the touch screen! Sniper Elite V2 won't exactly be the most "family friendly" game Nintendo has ever sold...

Little else is known about how the co-op elements of Sniper Elite V2 will work, especially due to the Wii U’s interesting online model. If you can’t wait for that long to play the game, however, you can find it on the Xbox 360, PS3, or PC with added co-op DLC. Now act like a pro sniper and be patient for more info.