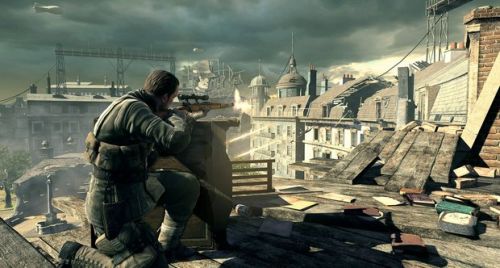 Sniper Elite V2 is right around the corner, coming to the PC, Xbox 360 and PlayStation 3 in May.  That means the hype train is kicking up no this one, with a handful of new videos being released.   Sniper Elite V2 is a game set during World War 2 where you play an elite sniper.  The gameplay is a mix of stealth and 3rd person shooting combined with first person sniping.  Sniper Elite V2's hook is the kill cam, which follows your bullets as they brutally hit their targets - sometimes with included x-ray visions - ala Mortal Kombat.

Our second video shows off the game's cooperative mode.  Two players can play the entire campaign in co-op.  One player can act as a spotter, tagging targets for their sniper partner, while the sniper makes quick work of everything from soldiers to vehicles.  Sniper Elite V2 will also feature a co-op mode called Kill Tally, which thankfully isn't a threat on a certain Co-Optimus editor, but rather a survival mode for two players.