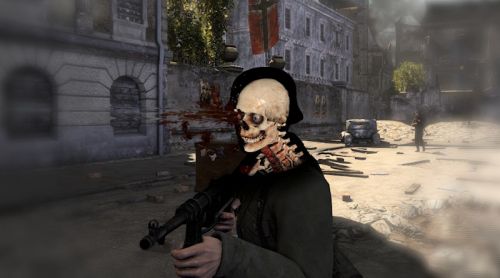 Rebellion's Sniper Elite V2 is set to release on consoles and PC on Tuesday, May 1 - less than two weeks from now. If you've been wanting a realistic sniping game and are eager to try it out, the freshly-released PC demo should cure what ails ya. A free download on Steam, the demo shows off the game's impressive graphics, realistic and methodical gameplay, and unparalleled killcam.

While the demo doesn't include co-op campaign support, it does give us a great idea of what to expect from the full game. Players start out in a ruined European town during World War II. The objective? To secure some explosives and use them to stop a Nazi convoy. Along the way, you'll have lots of opportunities to shoot foes from near and preferably, as far away as possible.

A number of factors affect the sniping experience beyond the rifle itself. If you've recently been running, for instance, you'll need to let your heart rate slow down before firing. Holding your breath helps too and zooms the camera in a bit closer than otherwise. Even still, it's quite possible to 'no scope' charging enemies in the heat of the moment, on lower difficulties at least. On the higher difficulties, players will also need to compensate for bullet drop over distance and bullet drift over distance (wind) in order to make perfect shots.

Those well-aimed shots can be anywhere on the opponent's body, as long as it kills rather than incapacitates. You'll know you did it right when the camera switches to a third-person perspective and starts following the path of the bullet from your rifle to target. Wherever it hits, an X-ray view (similar to those of the recent Mortal Kombat, but better) shows the bullet's effects in realistic detail. Just check out the screenshot above to see what I mean.

Even if you don't play PC games, I can assure you that Sniper Elite V2 is a very safe buy for fans of shooters or sniping in general. I usually suck at sniping in competitive games, but the single-player and cooperative focus here, as well as multiple difficulty levels, means that even slow shooters like me can have a blast.

Sniper Elite V2 launches at a $49.99 price tag across all platforms, so the Xbox 360 and Playstation 3 versions won't hurt your wallet as much as most new releases. Preorder from Amazon, GameStop, Steam, and other participating retailers and you'll get a very cool DLC bonus mission, 'Kill Hitler.'

You have the leader of the Nazi war machine is in your sights and one clear shot. Do you have the skill and nerve to take that shot and Kill Hitler?

As the Thousand Year Reich collapses, you have received intelligence that Adolf Hitler is returning to Berlin on board his personal train. Intercept it as it waits at the station. One brief opportunity to do what so many wish had been done – Kill Hitler!