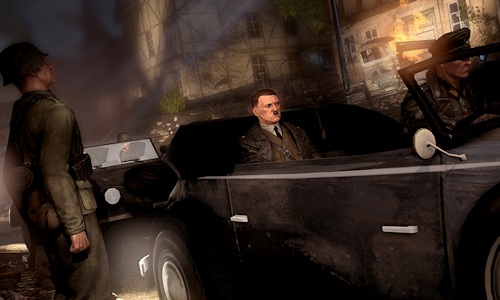 Sniper Elite V2 boasted one of the most interesting and fun preorder DLC bonuses in recent memory - the 'Assassinate the Fuhrer' mission. The game takes place during the closing days of World War II, a time when der Führer's number was just about up. As such, the mission provides the ultimate WWII sniping fantasy. Gamers who waited for our co-op review before buying and missed out on the bonus can fret no longer, as it goes on sale to all next week.

Once you've downloaded the 'Assassinate the Fuhrer' mission, it becomes instantly available from the single-player game menu. No, it's not co-op, unfortunately. But the mission still provides some terrific stealth and sniping thrills. You start out sneaking along a train station before reaching an outpost tower and  heading back along the other side of the station. From there, you'll climb a hill and locate the perfect sniping spot overlooking the trainyard. Once Hitler arrives, you'll need to take out multiple waves of Hydra soldiers (yes, I said it again) before getting your chance to plug one of history's greatest villains from afar. This DLC also unlocks two new guns: the SVT-40 and KAR-98.

The 'Assassinate the Fuhrer' mission hits the Xbox Live Marketplace on Tuesday, June 5 and will cost 800 Microsoft Points. The Playstation 3 version lands the June 6 and costs $10 - no word yet on the Steam version. Sniper Elite V2 supports 2-player online co-op on each platform.