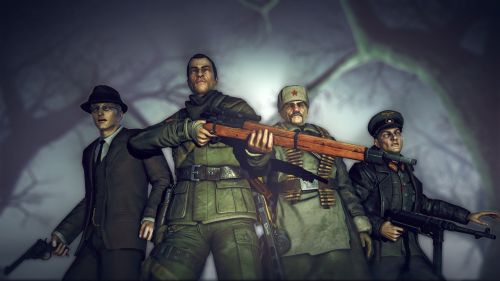 Ah, Valentine's Day. A day of romance, love, chocolate, and other marketable things... Like zombies! UK developer Rebellion, well-known for their Sniper Elite franchise, has announced today the latest installment in the series, Sniper Elite: Nazi Zombie Army. Look, we're just seeking love, and they're just seeking brains. No matter how you slice, we're all after a vital organ.

Anyways, this standalone game (meaning you don't need to own Sniper Elite v2 in order to play, but why don't you own that?) offers up a chance to enjoy the fun of staring down a sniper scope and watching the gore-iffic slow motion kill shots with up to 3 of your friends online. The entire campaign can be played through cooperatively with the other players taking on the roles of a German commander, a Russian soldier, and a scientist. Enemies become friends quickly when the dead start moving again, and all those friends may be needed when faced with some of the new enemies getting tossed your way, such as snipers that leap from rooftop to rooftop and suicide squads. The undead have never been more lively, it would seem. The announcement trailer, game screens, and a word from Rebellion's CEO about this new title can all be found below.

In addition to the new enemies and more players with which to co-op, Rebellion has also added in some new weapons, like a shotgun, to help out when those zombies get closer. Speaking about the new campaign, Jason Kingsley, Rebellion's CEO, had this to say:

Sniper Elite: Nazi Zombie Army is an exciting direction for the series. Self-publishing the game as a stand-alone title has allowed us to treat our players to something fun, something substantial that they can play co-operatively without needing a copy of Sniper Elite V2. Occult horror has really struck a chord with gamers, and now our fans have the chance to face hordes of demonic Nazi super soldiers with their friends.

All of this co-op love is particularly welcome news as the latest DLC for Sniper Elite v2, the St. Pierre mission, turned out to be single player only affair. New guns and missions are great, but not when you can't share it with friends.

Andrew and I enjoyed Sniper Elite v2's co-op campaign, and hopefully this standalone game will offer at least as much fun. The game is due for a February 28 release on PC and is currently available on Steam at a pre-order price of 20% off the normal $15 price. So for the next two weeks you can get one copy for $12, or a co-op friendly 4 pack for just $36. Not too bad of a deal for some co-op zombie sniping fun.