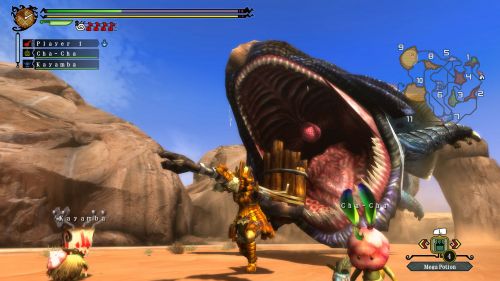 The latest entry in the Monster Hunter franchise has a playable demo launching today. The fantasy action series is wildly popular in Japan, yet still seems to be a rather niche title in the States. Capcom hopes to change that with Monster Hunter 3 Ultimate. You can power on your 3DS or Wii U and hit up the Nintendo eShop to see what all the fuss is all about.

I took a spin through the 3DS version of the demo, having recently introduced myself to the series with Monster Hunter Freedom Unite. It was brief, but you'll get the idea. You can hunt either a giant rabbit creature called Lagombi or an aquatic-looking dragon known as Plesioth. Sadly, the 3DS demo only supports solo play -I should note that the full 3DS game will support local co-op via Ad-Hoc connection. If you jump on the Wii U demo and find that it has co-op, let us know in the comments section. I liked the demo, but I really wish there was online co-op for the 3DS version. I don't think I'd enjoy monster hunting solo for long.

Nintendo has a solution for those of you (like me) who own a 3DS but don't have any 3DS-playing local friends. (At least none who admit it.) Well, it's kind of a solution. It's also quite baffling. According to Eurogamer, Nintendo recently announced a Wii U LAN adapter that will allow you to play your 3DS online. But there's a catch, and it's a big one. When you connect the LAN adapter to the Wii U you can use the 3DS/Wii U connectivity to "trick the console into connecting your 3DS version to Wii U servers for the game." So you can use your 3DS to play with other people who are playing on the Wii U servers. You can't start parties, but you can join others. The catch? You can't play the Wii U version at the same time. You heard that right. So you can use the Wii U LAN adapter to play with your 3DS, but you can't use your Wii U. I guess this makes up for the fact that you can't play MH3U remotely using just the Wii U gamepad? I'm so confused.

Check out the demo. Let us know if you think it's worth the headache.

Monster Hunter 3 Ultimate supports four player local co-op on the 3DS version of the game. The Wii U version supports four player online co-op, and you can play with four local players, if the other three bring over their own 3DSs for cross platform play. Yeah, it's weird.