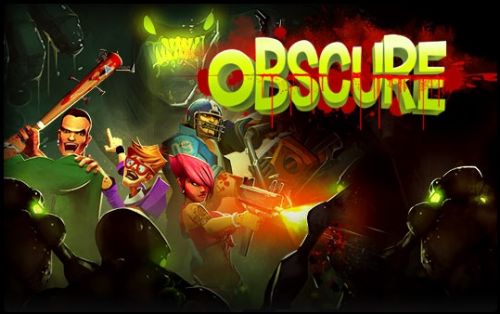 Everyone loves a good horror-themed, 2.5D, brawler/shooter hybrid. At least they should if they know what's good for them. Obscure is a new four player cooperative title being developed by Mighty Rocket Studios and published by Focus Interactive. Players can team up (either locally or online) and take down monstrous enemies with unlockable weapons and special abilities. You'll be taking the role of students as you play through the branching pathways of Leafmore High School.

Any of this sound familiar? Mighty Rocket Studios is made up of team members from Hydravision Entertainment, the same developer who made the ObsCure titles from the mid '00s. While those games were pure survival horror titles, 2013's Obscure looks like more of a stylized, cartoony splatterfest. Take a look.

Dude's wearing a bunny mask in the beginning. What is it with high schoolers and bunny masks?

I noticed a couple of things in the video aside from all the action, which admittedly looks pretty boss. Objectives like "Repair and protect the bus," "Lure Billy back to the bus," and "Pick up the arms at the top of the tower," lead me to believe that this will be more than a mindless shooter. Co-op may offer some risk/reward strategies, as well. From the game's description:

Obscure rises to an entirely different scale in multiplayer. In cooperative mode, up to four players (local and online) team up to survive. Split up to fill your objectives as fast as possible, or stay together in a cohesive team to increase your chances of survival!

I wonder if players will be able to split up in local co-op play. All of the footage in the video features a single screen display, and I caught a few glimpses of a second player. That could be through network play, or local players may be limited to the same screen. We'll let you know the skinny on co-op as soon as we find out the details.

Obscure supports four player local and four player online co-op. We don't know if the game will support combo co-op, but we'll keep you posted. It will be available for download sometime this spring on the XBLA, PSN, and PC.