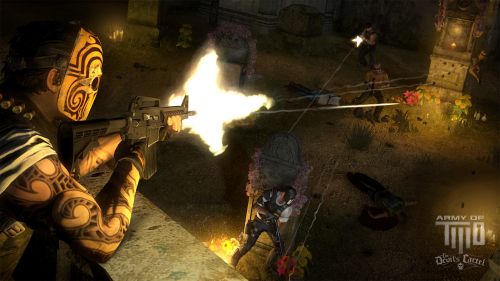 The next game in the Army of Two series, called Army of Two: The Devil's Cartel is supposed to be somewhat of a reboot. Gone are the characters of Salem and Rios, in their place two new protagonists join the story of mercenaries in masks. After some recent hands on time with the game, fans of the series shouldn't worry about too much of a shift, as I felt right at home playing the two player co-op game.

Our demo for Ao2 started with the customization lobby - something that pops up between every mission. In it you can pick a mask for your character, add tattoos or change your clothes.  Yup we're playing dress up in this macho game - but it's all in good fun.  The mask customization system has been brought in game and players can create their own custom masks for their character using a decal system much like Forza or Black Ops 2 does. I decked out my character with some nice pin-up girl tats and a tribal style mask while my co-op partner chose to go with a weird looking zombie mask and giant bear tattoos. She almost chose the panda bear mask but decided bear on bear wasn't kosher.

Weapon customization is back and plays a big role once again. Everything you do will earn you credits to unlock and customize your weapons and these once again can be chosen in between missions. Our mission started out in a graveyard where waves of enemies poured over walls.  We took cover behind tombstones which exploded in a hail of gunfire causing us to be constantly on the move. There was actually an NPC character with us as well that contributed to the action, which was intense to say the least.  As we worked through the graveyard dispatching enemies the game awarded us money based on how well we worked together.  Much like we saw in Fuse, there's a combo system for co-op partners to earn more money the better we played together.

All of the money in the game is shared between players equally too - so there's no coopetition here.  Eventually we racked up enough damage to unleash Overkill mode.  Trigger with a button press you'll deal massive damage to enemies and cover and have unlimited ammo without the need to reload.  If your co-op partner unleashes Overkill during your's, a Double Overkill mode is triggered where time slows down and John Woo flies in on white doves raining down destruction on everything.  I made that last part up - but time really does slow down and you'll earn massive amounts of cash.  One nice thing was the ability to "bank" the Overkill meter if you trigger it and it wasn't really needed. After the graveyard we entered the catacombs where the style of play changed up a bit from over the top gunfights to tense action.  Only one player has a flashlight in the pitch black, so you need to work together to spot the enemies that jump out at you from a variety of directions. It was a much slower and more methodical pace, which helped mix things up and keep it interesting.

For the most part Devil's Cartel felt like the previous Army of Two games.  You'll still worry about aggro-ing enemies, setting up flanking maneuvers, and making sure to keep your co-op partner alive. With both online and couch co-op support anyone can get in on the action. There's no additional co-op or multiplayer modes to speak of - instead Visceral wanted to focus on making a lengthy co-op experience that felt extremely polished. From what I played, if you enjoyed the previous Army of Two games, you'll enjoy Devil's Cartel, but I don't expect the game to create any converts if you didn't like the previous titles.

Army of Two: The Devil's Cartel is out on March 26th on the Xbox 360 and PlayStation 3.