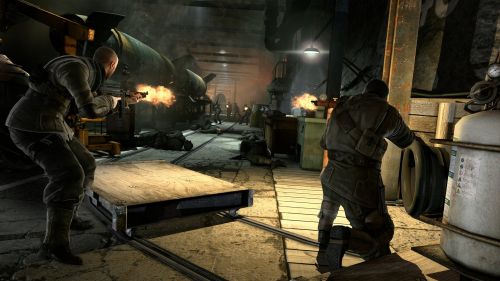 Rebellion and 505 Games recently released Sniper Elite V2’s “Game of the Year” Edition in Europe, including every piece of bonus content ever released in one, complete package. For US residents, however, we’ll be given our version of this bundle later this month.

What do you get when you cross Mortal Kombat with a sniper rifle? Some pretty sick game footage, that’s for sure. The Sniper Elite V2 “Game of the Year” Edition has everything a budding sniper will ever need, it’s just the US will be given our own GOTY version called the “Silver Star” Edition. In this bundle, all current DLC, including 5 separate DLC packs, 2 single-player missions: Nuedorf Outpost and Saint Pierre, 6 Multiplayer maps, 10 new weapons (not just sniper rifles), and the “Assassinate the Fuhrer” mission where players get the opportunity to kill the infamous Adolf Hitler, will be provided to gamers itching to kill some Nazis. Unfortunately: no "Nazi Zombie Army" content will be included in either edition. Check out the awesome trailer (note that this is the UK version) below:

Seriously though, if anyone out there’s been curious about this game and what it offers for co-op players, March 26th is the best time to grab the title and try out everything available. Purchase the game now from the UK, OR pre-order the “Silver Star” Edition, Xbox 360 or PS3 versions, at most retail outlets for $30. We recommend the latter because it's much cheaper.