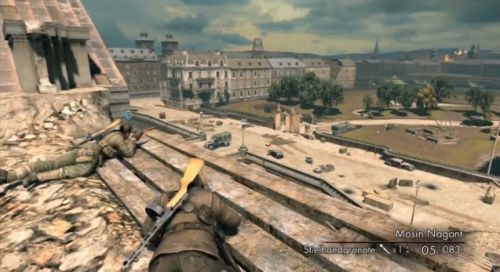 Jason     On the heels of his return from E3, I asked Andrew what game he wanted to play for our This Week in Co-Op piece. “I’m feeling something shooty,” he said. “Have you tried that Sniper Elite V2 game yet?” I had not. It was a game that had flown under my radar, but I was willing to give it a shot. The backup plan was Outland, a game that is decidedly not “shooty,” but still fun. So after I got home from work, I downloaded the demo and started playing. Within the first minute of play, I watched my slow motion bullet tear through a guy’s skull and explode out the other side...

The texts that followed can only be described as... enthusiastic.

Me: DUDE! I SHOT A GUY IN THE FACE AND HIS HEAD EXPLODED IN SLO-MO!
Andrew: RIGHT?!
Me: It is soooo on! Picking up this game RIGHT NOW!
Andrew: OK! *TEXT HIGH-FIVE*

Little known fact: my text high-fives have been known to break hands, and my text fist bumps can get you pregnant. You don’t want to experience the real thing. Or do you?

Jason and I compiled a little video featuring some of our badassery as we played through the Sinper Elite V2’s third mission. There’s a lot of spotting, sneaking, and shooting. We really had a good time shooting Nazi’s or Russians or whatever they were. Our only real complaint is that Sniper Elite V2’s trademark X-Ray shots don't happen nearly as often in co-op play. The dynamic bullet cam still makes it all worthwhile.

The following video features some of our best kills from the game’s third mission. My favorite part comes at 4:10. Check out Jason’s awesome headshot on the the tank commander that immediately precedes my slow-mo shot. I’d be lying if I said we planned that. The whole thing culminates in Jason’s ultimate X-Ray shot on a machine gunner. So not only does he get the best effect, he also gets the character with a full head of hair. Lucky.

The first minute sets the mood, and then we kind of just go crazy.

We did manage to coordinate some of our other attacks, or at least we attempted to sync up, not always with the best results:

Sniper Elite V2 doesn’t include any kind of countdown timer feature for you and your partner to time your shots accordingly so you can take down two enemies simultaneously and avoid raising alarms. Andrew and I had to work out on our own how we’d time it. We decided to go with the old “3-2-1” countdown, with both of us firing on “1,” not after. Great. As we’re ascending a tower (@ 3:00) to get a vantage point on a pair of explosives we just planted on a bridge, we come across a pair of guys just hanging out, doing whatever Nazis do when they’re not terrorizing folks. A perfect opportunity to test our countdown tactic. We both mark our targets, line up our shots, I call out “3... 2... 1” and BLAM! BLAM! Two fewer enemies we have to worry about. We’re synced up and our strategy works!

We proceed further along and get to the vantage point where we can see the explosives.

Ok, so maybe it wasn’t a perfect strategy...

We've had a great time with Sniper Elite V2's co-op campaign. If you have a good online co-op partner, and sniping's your thing, we highly recommend checking out the game. There's even a demo available for those who like to try before they buy. If you want more information be sure to read our Co-Op Review.