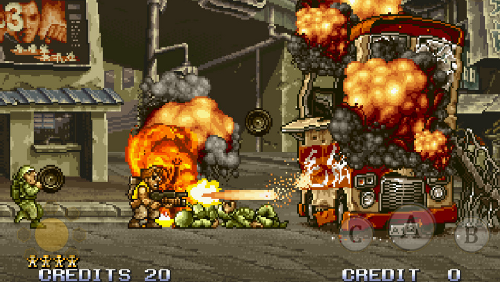 A sort-of-new release in the classic arcade realm, Metal Slug X is a remake of Metal Slug 2 that has been reworked for iPhone, Android and iPad devices. The game, which marks the fourth mobile Metal Slug release, features tweaked controls for the touch screen as well as altered enemy positions and maps, making it a much different experience than the game it's based on. It's also just one letter away from Metal Slug XX, which is totally not confusing at all.

Co-op play is limited to two players via Bluetooth connection, meaning both players will need iOS or Android devices to start slugging metal together. It's a bit of a barrier to overcome for some simple two player action, but it's portable and it's a whole lot easier to find an iPad owner than it is to find a Metal Slug arcade cabinet these days.