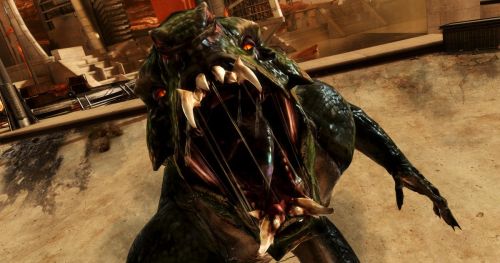 For Star Trek fans, nothing could be more nostalgic than facing off against such a menacing race of reptilian aliens known infamously as the Gorn. They initially appeared in the 1967 “Arena” episode of the original Star Trek series, striking fear into the hearts of many. If you haven’t heard of them, they’ll be getting a massive, modern makeover in the newest Star Trek game from Namco Bandai.

Various types of Gorn (over 15) will be opposing Kirk and Spock throughout their mission. Some will stay true to the original Gorn gladiator like in the TV series, while others will use their technological prowess (who knew?) or their speed to try to outwit/outmaneuver your teamwork. There will even be female Gorn present in this game! Watch this behind-the-scenes look at these ferocious enemies of the new Star Trek title:

Any fan of Star Trek should be thrilled to battle against such a popular villain of the series. But even if you aren’t that much into the game (you just watched the reboot and might be into the franchise), this game will still have a solid 2-player co-op mode that looks to satisfy the inner geek in all of us.

Star Trek will be available for Xbox 360, PlayStation 3, and PC on April 23rd. Also check out the gallery below for more shots of the reptilian baddies.