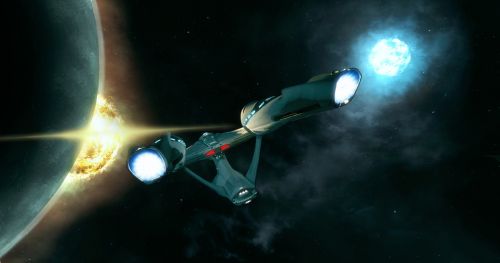 The upcoming two player co-op Star Trek game has gotten an official release date.  The game is scheduled to be released on the Xbox 360, Playstation 3 and PC on April 23rd, 2013.  This should coincide nicely with the upcoming Star Trek movie, Star Trek Into the Darkness which opens May 17th in theaters.

Of course it wouldn't be a release date announcement without talking about pre-order bonuses and such.  Thankfully it doesn't look like Star Trek is splitting up its pre-order bonus offers between retailers, instead anyone who pre-orders the game gets access to the "Elite Officer Pack."  Included in the pack is actually a set of 5 sub-packs containing skins and some bonus weapon type stuff. There was also one new screenshot included with the release date announcement.  Star Trek will feature two player local and online co-op.  We went eyes on with it during E3, you can read those impressions here.