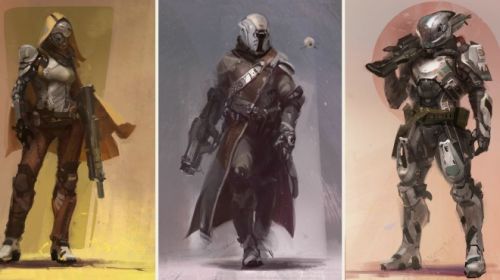 Bungie’s next blockbuster title, Destiny, will do co-op gameplay better than a Halo gamer ever could, due to the knowledge they've gained from their successes and failures. In a recent interview, Design Director, Joe Staten, gave some insight on changes to co-op and the number of character choices given to the players that will shape Destiny dramatically.

When you’re known as the makers of the legendary Halo series, what’s the next step? For starters, Bungie will be fixing the way choices affect the overall co-op experience. From their past titles, they’ve looked back on what could’ve made them more successful and have been working to improve them within Destiny. Staten agreed that in a multiplayer game, the epic single-player experience needs to be replicated and shared as equally as possible between all players:

"In the same way we're making your heroic story, your legend, that carries over into the cinematics. You're the star of the cinematics as much as you're the star of your own heroic tale. So if you're playing in a co-op way, we're not going to do that crappy thing that happened in the old Halo games where, if you're playing co-op, you don't show up...you're not the primary role."

This concept shines mainly in the number of characters within game itself. Instead of giving just the main character of the story all the glory, all players that play co-op will feel just as epic as Master Chief was in Halo by creating their own special characters. The Arbiter, Master Chief’s Covenant counterpart, was designed to be a major part of Halo 3’s story, but didn’t give players the same sort of satisfaction as playing the ultimate savior of all sentient life. This is where “player choice” comes in to become a centerpiece in Destiny’s underlying aspects:

“Putting a history into the world was extremely important, something you felt you were fighting for, the civilization that was once yours that's fallen, that's trying to recover. But it also goes to player choice, too, and not just choices you'd get in a Halo game, the moment to moment of how I'm going to take apart this encounter, what's my combat toolset, “ which Staten transitions into, "What kind of character do I want to be in the world? Do I want to be a man or do I want to be a woman? That's a choice we never gave someone in the Halo games.”

Here's a video of Destiny's character development that was revealed 2013 Game Developers Conference.

With a lot of emphasis being put towards the shared gameplay in Destiny and tons of different characters choices that we will be able choose from, it will be interesting to see how Bungie will try to leave us with even more co-op satisfaction than ever before.