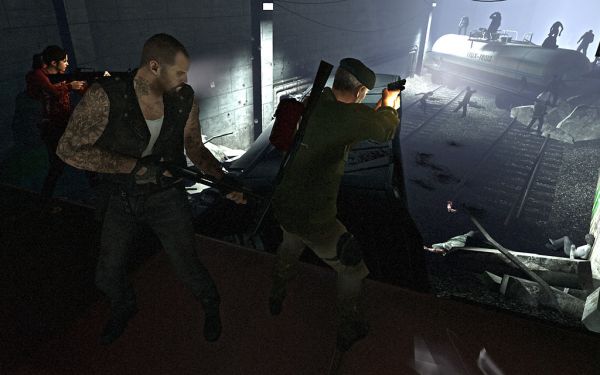 1) I remember downloading the Left 4 Dead demo and playing it with my wife. Now let me tell you nothing quite beats the feeling of being swarmed by zombies and having your wife next to you freaking out while unloading her auto shotty into the crowd mowing them down... now that my friends is pure win. I remember playing the Blood Harvest movie line and getting to the finale on expert, it started out easy enough but the corn field crescendo turned out to be a pain to get through, when we finally got to the farm there were sighs of relief we made it we thought now we just have to hold on long enough. We loaded up on ammo, scrounged any pipebombs/moltovs we could find and set up shop in the barn... but as we all know someone has to call the army and what better person than Bill.... yea I was Bill, so I hit the button have a nice little chat with the guy at the other end and make a dash to the barn with such speed that I put runners to shame. We held down the Barn with a fury killing anything that dared come after us, and when the vehicle finally arrived not everyone made it, Lacey got snagged by a smoker, JG met up with the tank, and the other guy got killed by zombies.... which left only me staring at the carnage from the safety of the APC.... my only words "Someone has to make it."

2) The coop night for Gears 2 was simply amazing, get a bunch of us co-optimus folks in the same game and things get a little crazy. Baldy, and JG were a blast to play with especially with the comments we were making back and forth. Just so you know if you ever want to know where the enemies are coming from... they are to the north.

Mercenaries 2. I'm not sure if it was using a helicopter carrying a fishing boat as a mobile platform of doom, or the 3 drive-by artillery strikes we used on the tankers while we were planning it out.

Also Castle Crashers. But that goes without saying. ;)

I've been gaming since the atari 2600 and the first co-op game that I really enjoyed was Super Contra for the SNES. It was short and fun and my cousin and I could finish it around 20 minutes without dying (sometimes). We'd play that over and over so to this day I'd rather games be fun and short rather than too too long.

In college, I had a blast playing NBA Live 95 with my roommate on the same team. Golden State Warriors with Sprewell, Weber and Hardaway was team we would always use.

After college, I didn't play as much and if I did it was only on single player. I'm a late adopter to the Live experience only joining recently, and I'm so glad I did. It makes gaming fun again for me. I've only played GOW2 online so far, but it never gets dull anymore. Very first time I played online was with Horde on Day One map, and we got to level 47, in spite of me. I thought it was easy after that, but soon discovered it is so hard to even break level 20 anymore. Still haven't passed the 50 levels yet.

Thanks to everyone for your contributions, not only to this article, but to the site as a whole! This site has grown and become what it is because of all you. Here's to co-op gaming, and to a co-op community!