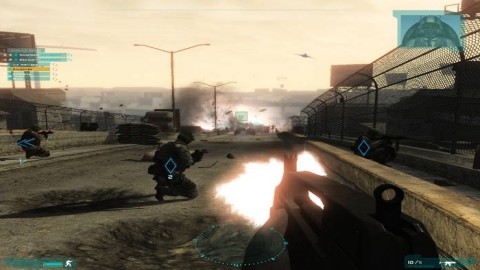 Too many to recall them all! Here are a few.

1) GRAW2. I bought this game ONLY because the fine folks here assured me it'd rock, and it did. We did the first ever meetup thread on the Co-Optimus boards for this game, and for several months had awesome sessions every Friday night. For me, that solidified this site and co-op gaming as the only way to go from now on. Playing with a friend here in Houston and several others from all over was (and still is) amazing.

2) Mercs 2. JG and I rolled through Mercs 2 in about a week, and we hit it almost every night. It was a lot of gaming and we got on each others nerves a bit, but it really was a blast to have one designated partner who wouldn't advance the story without me. Halo 3 and Gears I played with people who already beat them, so this was a new experience and I really enjoyed it.

3) L4D/Gears 2. I'll merge these two titles together because I played them with more folks from here. Biohzrd451 and his wife are now on the top of my co-op list, and we've rolled through both of these several times. L4D is the pinnacle of teamwork in gaming: either work as a team, or die screaming. After a few rough attempts at first I figured out how best to be a good teammate. The promise of DLC keeps me salivating for more.

Gears 2 would be even better with more than 2 for the campaign co-op, but the Horde mode or the miscellaneous vs modes against bots makes it a frequently played title. Working together against the computer/A.I. is my favorite since there are no hurt feelings and I'm not getting slaughtered by a 14-year-old boy streaming profanities at me.

Really, the games were all a lot of fun, but the best/worst time I had online was with Ryo_Strife on Left4Dead with 2 AI characters.

I will have nightmares of Bill disturbing the witch for the next month, and Francis steals health packs like a punk - we're nicknaming this the Leroy Jenkins syndrome.

hmmm... co-op! I've gotten to the point where I only buy a game if it supports co-op! I'm tired of the deathmatch crap with 12 year olds screaming in my ear over being 'Powned' or whatever the hell they say. And the language... good grief I'd have eaten a few soap bars had I talked like that at home!

My best co-op experience has been staying in touch with my best friend who was transferred out of state. But we've stayed in touch with game nights, usually twice a month. He's only a computer user, but we still get after the bad guys in Rainbow Six games, Ghost Recon games, and a few others like IL2 Sturmovik and SWAT. A nice glass or two of scotch, good conversation and killing bad guys... what more could a guy ask for? :lol:

Recently I've started adding Xbox gaming friends and I have to say, playing CoD:WaW Zombie mode is my new favorite. Trying to survive the waves is a blast, and trying different strategies to see what works (and what doesn't!) is way too much fun. That may rank a new best... I need to get into some more game nights or meetups to get some more gaming in!