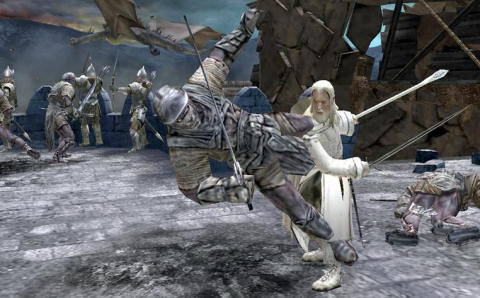 Co-op gaming requires at least two players; that's a given. Some games, like Castle Crashers, allow more players to join in the action, and even provide flexibility for players who are at different points in the game. Some games, however, only support two players, which in almost all cases is better than one. Whether it's a plot conflict, processing snag, or just plain too crowded, a good portion of the current library of co-op games is limited to two players. Games such as Mercenaries 2: World in Flames and Gears of War offer the "drop-in, drop-out" feature, so you're rarely without a friend to co-op with; but what happens when you start a new campaign as a Co-op Couple?

Answer: you're stuck. See that wedding band or engagement ring? There's another one there next to it; throw it in the fire, and it reads in the language of Mordor, "Don't play until I get home."

As with any commitment, however, this unspoken-but-binding contract carries the risk of being broken, and the opportunity for infidelity will present itself: what seems like a harmless day of LEGO Star Wars on your Playstation 2 is interrupted as your cell phone alert tells you that your old high school buddy has just sent a text message. “Want to play RotK? My Gandalf has a new ranged attack!”

(Of course, real life text messages are never punctuated that well, but bear with me.)

Thirty seconds scrape by, each one dragging you farther away from the guilt that gathers in your throat and keeps you from swallowing a contemplative swig of iced tea. Your shirt soaked, you finally respond and agree to run through a few stages with your long-distance buddy…this why you bought the online adapter, remember?

Besides, you’re playing Lord of the Rings: Return of the King. Everyone knows that you can’t level up nor advance the story by playing online co-op. Just for this one time, you’re glad that EA decided not to allow perpetual character development in the online mode. Three hours and six hundred dead orcs later, your friend thanks you for the good time and signs off. You quickly remove the disc from the console, snap it away, hit the power button, and run to the kitchen just in time for a tea refill as the front door opens and your significant other walks in.

“Grueling. I need to steam off; let’s play that game.”

It’s not an invitation.

As your partner drops their satchel next to the couch and reaches for the game case, sweat trickles down your temples. On the cover, Aragorn’s normally clenched teeth are now fixed in a menacing grin. Your partner pops the disc out and hesitates; it’s still warm. For an agonizing moment, you grip your cold tea mug until your fingertips are numb. In the living room, your partner shrugs off the oddity and fires up the game, unraveling two controllers and looking expectantly in your direction.