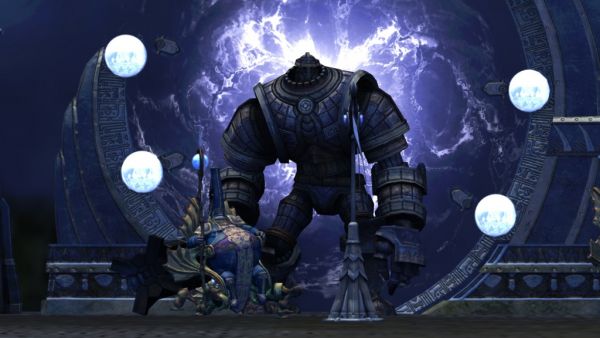 Co-Optimus: Will we see new Demigods added via DLC?

Co-Optimus: What's your favorite Demigod of the bunch?

Mike:Unclean Beast. There's just something about a plague-spewing hound chasing down and obliterating enemies. The Beast is a fast skirmisher that requires good situational awareness, since he can't take too much damage. You're always on your toes trying to find that next soft target while avoiding being someone else's target.

Co-Optimus: Do Demigods get any benefit from working together? For instance do powers combine or have any counteracting effects?

For example, Oak can use Penitence to force an enemy to take more damage, which enables Regulus to dish out a super powerful Snipe. We didn’t stop at Demigod abilities though! One of my favorite defensive plays is to use the Orb of Defiance when I'm low on health, which makes me invulnerable but unable to do anything and buys me enough time for an ally to a heal or a shield.

Co-Optimus: What's your one favorite standout feature of Demigod?

Mike: The huge range of things you can do to with a single character. There's at least three different builds I can use for Unclean Beast, and they all have their place based on what I'm fighting. Then there are a slew of items on top of that, and I can change those as the game goes on based on what I've learned about my enemies. Once you toss in a partner, the number of options just explodes.