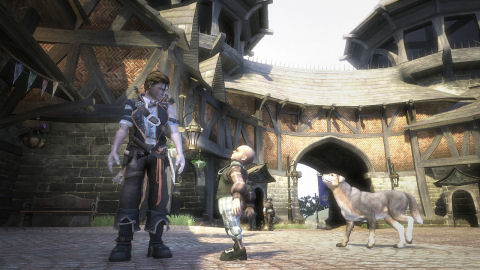 Co-Optimus: Can you explain in detail how the “orbs” work in the seamless co-op mode?  Are there any limitations to it?  For instance, is there a maximum amount of people in one area?  Can you block certain people from entering your world to mess things up?

Dean Carter:  When players wander around the world of Albion (presuming they’re connected to Live), they’ll see little glowing orbs representing other players going about their business. It’s up to you who you allow into your world. You can restrict orbs to representing friends, or open your Albion to the world (A videogame version of “Bring me your tired, your hungry, your poor…”) Once other players are in your world, you can – as usual with the excellent 360 Live systems – boot people out if they are making your experience less than fun.

Like every other feature in the game, we want to ensure that orbs never irritate the player, or in any way cause the experience to become actively worse. As such, we are able to define the amount of orbs allowed in a region, or that are visible at any one time. This avoids issues where, for example, 500 people decide to sit in Bowerstone Market just to try and break everyone’s game. We’ll still be tweaking these values for a while, but I don’t think most players will even notice that we’re tidying things up behind the scenes.

Editors Note:  This interview occurred before the fabled "not shipping with Orbs announcement."   But we've been assured the hope is to have that patch day 1.

Co-Optimus:  Are players tethered to each other in the game world?  Or can one player be in one town and another player in another town doing completely different things?  For instance, can each player do different quests at the same time?

Dean: Orbs aren’t tethered to each other at all. You can be at entirely different points in the game, with completely transformed regions, and still see people moving about. If I’m in one location which is a wood in my world, and a farm in theirs, I’ll see them darting among the trees. Meanwhile, in their world, they’re doing farming-related tasks, but we can still see each other.

Co-Optimus: Is there any weapon, gold, or item trading between players?  If so do those players take those items back to their gameworld or is it only in the instance of the host player?

Dean:  You can trade items with people even if you don’t bring them in as a henchman. All you need to do is stroll up to someone, get their attention, and choose the appropriate option from a little menu that pops up. Easy.

Co-Optimus: Is experience carried between sessions, or is it only affected on the host player?

Dean: If you join someone’s game as a henchman, and that henchman was created from a Fable 2 save game, then you’ll gain experience (and accumulated cash payment) when you leave. If your henchman wasn’t linked to a Fable save, then there’s effectively no hero to give that experience to! It’s like someone without a name or address winning a lottery ticket; where would you send the prize money? I say, “Fool! Play the game and use a save!”