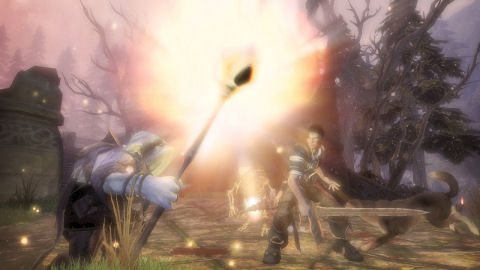 Co-Optimus: Can you play through the entire game in co-op from start to finish?

Dean:  Yep - you can play the game through from beginning to end in co-op mode, but there are some bits of the game where having co-op interactions makes little sense (in GUI menus, for example).

Co-Optimus:  In the mini games like the pub games, what happens when one player starts a mini game in co-op?  Can the other player join in and play?

Dean:  Unfortunately, although we wanted to do variations of the games which were specifically tailored to multiplayer, this wasn’t possible in the time available. It’s definitely something we’d like to do in the future, though.

Co-Optimus:    If you have a Good character and your co-op buddy is Evil, does this affect how the NPCs perceive you?  Is there any advantage/disadvantage to this?

Dean:  We tried going for a split AI system at one point, but – due to the fact that the hero and henchman are so physically close most of the time (as they’re both on screen) – players found it almost impossible to decipher who an NPC comment was aimed at. When thirty people are gathered around you, there really needs to be a combined, single message otherwise things get very confusing, and actively damage the feeling of ‘heroism’. As such, NPCs react to henchman as an extension of the hero – after all, they can’t cause mayhem unless the hero flicks off the safety switch.

Co-Optimus:  What’s the coolest thing you’ve seen in a co-op scenario in Fable 2?

Dean:  I think the coolest thing will be seen a lot. Because several of our spells and sword strikes give enemies ‘air-time’, you can get situations like this:

You have a Hero Swordsman/Mage and a Henchman who specializes in ranged combat, using a rapid repeater flintlock.
The Hero steps in with a couple of strikes, finishing with a ‘Flourish’ (all using the (X) button) that lifts the enemy into the air, which the then follows with a Time Control spell to slow the world down (by stabbing (B), holding it and then releasing it).

The henchman has already gone into targeted aim mode (just by holding down (Y)), and – because he’s a super-marksman, shoots the weapon out of the enemy’s left hand, then the one from his right hand, and then finally blats him in the head with a final shot while he’s still in the air. Bam, Bam, Bam. The enemy falls to the ground and explodes into a shower of experience orbs. All experience gathered was multiplied by a large factor because you both played together to take the guy out. It’s fantastic.

We want to thank Dean Carter, Josh Kerwin and Sara Nicholson for their help with this interview!