One of the surprise games of last year's E3 for me was Hunted: The Demon's Forge. While the concept of it intrigued me, the screens and info I had seen up until that point never seemed to grab me. Once I got my hands on the game though I started to "get" what inXile Enterainment was going for - a new kind of Action RPG that plays like the third person shooters we love so much but still retains a lot of the depth that makes RPG games so addicting. Almost 8 months later I got to play the game again, and once again I was surprised what the game had to offer as I got a deeper look into Hunted's world, story and gameplay.

Hunted: The Demon's Forge is a two player co-op game where players assume the role of a pair of adventurers - Caddoc and E'lara. Caddoc is your manly man, wielding big muscles and a strong sword while E'lara is the badass female rogue with a focus on magic and arrows. In single player you can change between these characters at special stones throughout the world while in co-op each player takes control of a specific character.

After playing through a brief intro level to the game on the Xbox 360, getting a feel for the controls and characters, I was joined for some intimate co-op by inXile's Maxx Kaufmann. I decided to use E'lara while he used Caddoc as we played through one of the earlier missions in the game. Our quest began after touching a mysterious crystal which triggered an undead horde. Soon we were overrun with skeletons and other nasties while the game world changed from luscious green to a more foreboding black and purple. 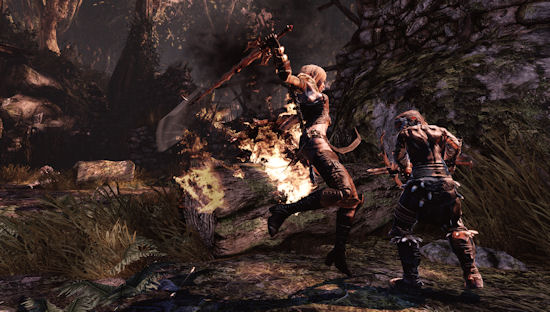 It became immediately clear this game was built for co-op from the ground up; while Maxx's Caddoc held the horde back from my weaker E'lara with melee attacks, I picked off enemies with my arrows from a distance. So while he was helping me from getting overrun, I was also helping him from getting overrun. There's little things here, like the ability for Caddoc to levitate enemies giving E'lara time to use an Ice Arrow ability to freeze and then shatter the cold creature. This constant balance of each character protecting the other became apparent many times through our play through. I was told that one of the goals in this design was to "train the player to play co-op."

I had asked Matt Findley, president of inXile Entertainment about this dynamic. I wanted to know what games inspired this sort of play. His answer? Table top Dungeons and Dragons. The team knew right from the get go they wanted the feel of co-op play you get when you sit around the table with a bunch of buddies playing good ol' D&D. "We wanted to weave the concept of co-op into the fiber of the design," were Matt's exact words.

Co-Op isn't just prevalent in the game's mechanics, with two distinct characters with their own personality, the duo has some truly entertaining dialogue. There's a back and forth that bring you into the character's you are role playing as - E'lara always seems to take playful jabs at Caddoc while Caddoc likes to crack jokes. So while a lot of the game may be dark and serious with plenty of gore and grit, there's a light hearted nature at its core which reminds us of some of the inXile's teams previous games like The Bard's Tale.