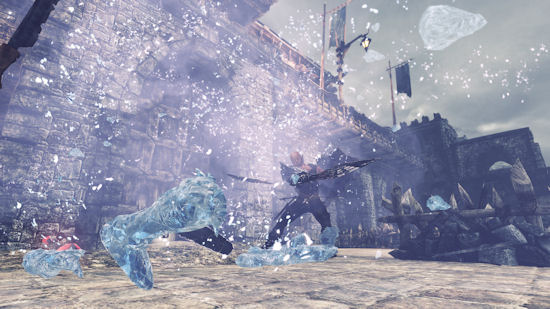 The quests themselves sometimes take on this light hearted nature, as one side quest had us talking to a man who was killed by a pack of rabid chickens. These side quests, I believe there were 60 of them, are triggered by finding "death stones" which are scattered througout the game's levels. This was just one of the areas the game surprised me, in that, while there is a bigger over arching "quest" - there's a ton more optional content for bonus loot and items at your disposal.

Which brings me to the loot. This perhaps is the biggest change I saw in the 8 months. Now loot has definitive stats on it as well as traditional rankings of rare-ness. Crude, Fine, Normal, Rare and Epic loot are all obtainable for your character adding in the addictive layer that many traditional RPGs possess. The one issue though is, this breaks the traditional dynamic of an action game like this - one in which players are normally running from beginning to end as fast as possible. Instead you'll find yourself stopping, comparing the loot that's dropped, and then deciding to move on. No doubt this turns your 8 hour "action game" into a 20 hour Action/RPG - which is what I was told should be the expected playthrough time. This isn't necessarily a bad thing, in fact, it allows you to soak up the experience further - but I could see some gamers getting annoyed waiting for their partner to decide if they want the Mace of Slamming +1 or the Axe of Maiming +2.

I was shown a few other bits and pieces of the game, some showing off the truly grand scale of what can happen. In one instance we had to fight through a courtyard to take a ballista that would be used to shoot down a tower filled with enemies that rained arrows down on us. Once again, team work was crucial as one player had to cover the other to make it to the ballista and then keep the waves of enemies off of them. I made quick work of the oncoming enemies by sniping them in the head with arrows as Maxx rained down impressive chain lightning spells to dispatch groups of oncoming enemies. If one of us went down, reviving is as easy as chucking a revival potion onto your fallen partner - if both go down its game over. It wasn't long before the tower crumbled and our enemies were vanquished, it was quite the impressive sight. 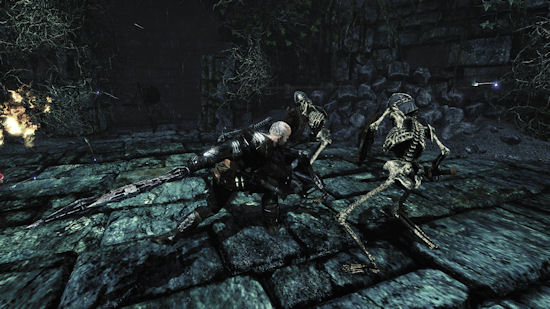 Your characters themselves are leveled up and upgraded together. As you collect crystals to unlock abilities you unlock them for both characters, regardless of who you play with. There isn't a huge skill tree for either character, but there's definite flexibility in what you want to specialize and upgrade in terms of magic, abilities and power.

One thing I was really impressed with was the attention to detail for co-op players in terms of flexibility. When joining a game you choose which character's to take - the host's or the guest's characters. This allows both players to be on the "same" level. But don't worry - regardless of who earns the main quest progress, both players get to bring back loot, items, and other side quest completion bonuses with them back to their own game.

Finally I was greeted with some excellent news - due to the overwhelming number of requests for couch co-op in the game, inXile has added split screen play to compliment the game's online co-op. I was told that while it was never in the original scope for the game, the sheer response for couch co-op play forced them to make it work.   Another hidden gem that inXile wasn't talking about was The Crucible, which is planned to be some sort of map editor for the game.  We were told more details on that would be revealed soon.

Hunted: The Demon's Forge really seems to have created exactly what it set out to do. This is a modern day Action/RPG for the "Gears of War" generation. That said, there's so much depth and style here that its easy for any gamer to really enjoy the title. I may have only sampled a few quests and options from the game, but I already found myself addicted. This is a game you'll be playing with co-op friends for quite some time.