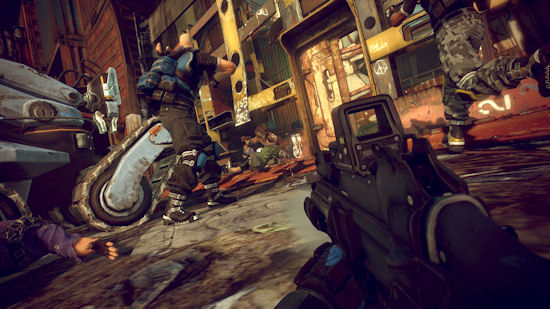 Ok, so after all of this customization talk, lets talk about the actual game. Your campaign, multiplayer and co-op are all chosen from the same set of missions. When you start a mission, you are given the choice of how you want to play it, limiting which sides the players can join. From what I could see, there were 10 missions available on each side and each one is a series of mini-objectives with an over arching goal. The levels themselves are laid out in such a fashion that promote the use of the SMART movement system, players can slide into cover, climb up containers and ledges, and leap small gaps all while holding a modifier button. It gives the game a bit of a Mirror's Edge feel, but most importantly, it changes the strategy when approaching combat situations.

One mission we tried involved us playing as the Resistance trying to break out one of our comrades that was being held captive. But to do this required numerous mini quests during the game - for instance we needed to breach a door which required covering someone to plant explosives. Another required a Operative to hack a terminal to gain access to a different area. Throughout the game these objectives become dynamic to the class that you choose - classes include Engineer, Operative, Medic and Soldier. Not only does each class perform unique tasks in the mission itself, but each brings something vital to co-op and team game play. 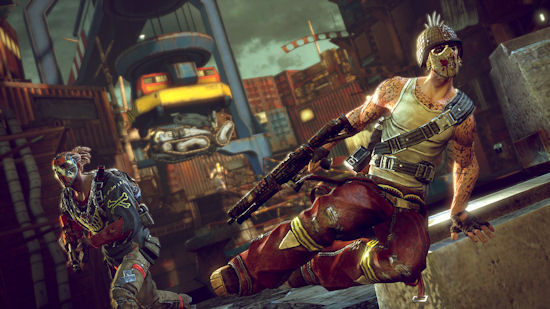 Medics are able to give healing buffs and revive teammates, Soldiers resupply ammo and can blow up targets, and Engineers can buff weapons turning the tide of battle. Now here's the kicker - while most shooters would be fine with giving XP just for killing the enemy, the bulk of the XP earned in Brink comes from supporting your team mates and completing objectives. This dynamic almost forces players to work together and to think about which class to choose - classes are changed at stations placed throughout the level so you can change them up on the fly. I was surprised to see my character earning bonus XP just for standing near my team and covering them when they got shot. This focus on XP becomes most obvious when you look at the leaderboard during gameplay - players are ranked by XP.

As we progressed through the mission to rescue our friend, it became evident there's an ebb and flow to the matches in Brink. Eventually one side "figures out" the best way to stop the other and there becomes this sort of transitional state. Players realize the team needs more of a certain class and things shift to "solve the problem." I compare it to the FASA developed Shadowrun FPS that came out a few years back. While many people didn't appreciate the game, there was a solid group of my friends that enjoyed the game which featured a similar dynamic because of its class based gameplay. I mentioned this, almost embarrassingly, to Splash Damage, but to my surprise they seemed OK with it and agreed. The only problem I had during my playtime was it took a little too long to get back from the previous command post into battle at times, this was especially evident as we tried to evacuate our guy from the compound and get him to a helicopter. The distance we had to travel to get back "into battle" took a long time and we ended up getting split up and picked apart quite easily. Obviously, communication is key here. 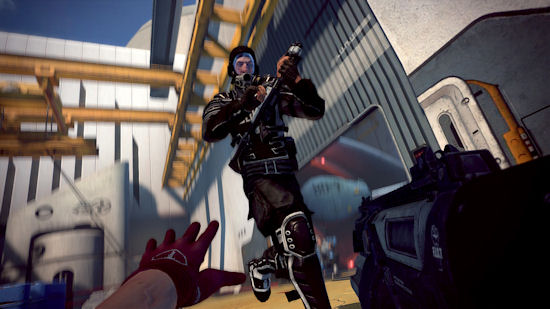 Its hard to put a "time" on a mission because depending on how well a team works together, they may be able to complete it quicker than others. Combined with the flow I talked about earlier I saw times ranging from 10 minutes to almost 30 to complete a map. With such a focus on co-op some may be worried about taking their game online because of a lack of communication between players. Luckily the game "auto" requests a lot of things. If you run low on ammo or health, your character will call out in his voice that he needs it, and the appropriate classes will get a notification on their HUD.

Brink looks to set the tone to be a different kind of shooter when its released later this Spring. Combining class based shooting, character customization, seamless play for any game mode, and lots of replayability should make for an addictive game. There's so much here we didn't even touch on - little things like totally customizable controls, host migration, an in-game tips DB, collectibles and more. Obviously we love the focus on cooperative gameplay and the little things Splash Damage has done to assure players working together get rewarded. We absolutely can't wait until May 17th to get 8 of our friends together to save the Ark...and to escape it.