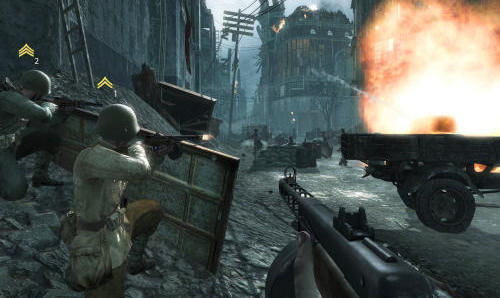 Reviewing Call of Duty: World at War is a daunting task, because the first step in trying to portray my opinion to readers is to break the mantra of comparing this title with so many other beloved games: countless World War II shooters, other Call of Duty titles (including the most previous, the engine of which this game is built upon), Left 4 Dead, and even Gears of War 2. If it kills us, though (and it has…many times over), I’m going to give you my honest assessment. In the end, it’s all a matter of personal opinion, and we’re either going to save you $60…or push this game back onto your “must-buy” radar.

I’ll start by feeding you the sour grapes: for those of you that enjoy co-op but succumbed to the Dark Side when Call of Duty 4: Modern Warfare set the competitive multiplayer bar higher, Treyarch has carried the XP and rankings system over to online co-op for World at War. In a baffling move, however, you cannot use your XP rewards (Create-a-Class custom loadouts, Perks, etc) in any of the co-op modes; they are limited to versus only. The only XP unlock that has any showing in co-op is the clan tag.

Upon starting an online co-op party, you’ll find that campaign progress has no bearing on what levels are available: they are all readily playable. Offline splitscreen co-op and the solo campaign both have a progression that requires you to complete each level at least once before moving on…but apparently, playing online lets you skip ahead. The trade-off in this is that while you can hop into any level and earn XP, completing the online co-op campaign will not unlock the Nazi Zombie (Nacht der Untoten) 4-player survival mode.

An issue that hits closer to home (i.e. an actual gameplay issue) is the lack of direction while playing the solo campaign, especially when in the midst of a large-scale battle. There are audio cues – such as Gary Oldman or Kiefer Sutherland telling us to “move forward!” – but they’re usually lost among the sounds of PPSh-41 and Thompson machine gun fire and grenade explosions. Unless you’re doing a co-op session with a seasoned player, it’s easy to get lost. Many times, your best bet is to move forward when possible, and lay still when not…just be ready to toss back live grenades, because the AI pulls no punches when it comes to wanting you dead. Enemies seem to continuously respawn until you either move ahead into new territory or take out enough to where the game will slow down the waves to give you a chance to dash forward.

My final contention is that while we are extremely glad that a Call of Duty title finally has functioning 4-player co-op – and actually delivers a very good experience for the most part – the developers are still catering to the competitive multiplayer fans: newly posted is the “Dossier” system on CallOfDuty.com, which displays match history, leaderboards, XP progression charts, player-to-player comparisons, heat maps, and more. As yet, there doesn’t seem to be a way to view co-op stats (aside from your cumulative XP count, which includes co-op XP). Granted, we’re outnumbered, but is it that hard to add a few extra data filters? Apparently so. I – for one – want to see Nazi Zombie and co-op campaign stats.

Speaking of the Nazi Zombie survival mode: this is one great reward for completing the solo campaign. It seems odd to offer a co-op mode as a single-player endgame, but it’s something to look forward to. It’s a lot of fun, and involves some strategy, teamwork, and quick thinking; it helps to have good aim, too. There has been some controversy surrounding this mode – and I encourage you to form your own opinion – but if you allow yourself a little bit of obliviousness, then this 4-player mode can be blissful fun. The game ships with one map for the Nazi Zombie mode, but when adjusting your match settings, you’ll notice that it asks you to choose a map (currently, “Nacht der Untoten” is the sole available map); but whether this is just a copy-and-pasted menu from the co-op campaign, or plans for future additional maps…it’s an inadvertent tease that we look forward to hearing more about.

Earning XP in the online co-op campaign is signified by numbers popping up on your heads-up display when you have “competitive scoring” turned on. This setting doesn’t affect your game other than separating XP among each player as per their individual performance. What it does do, though, is to provide an optional ad-lib variant into an already entertaining experience.

The core gameplay of World at War holds its own against any other World War II shooter, despite that this makes one too many. Competitive multiplayer is not without its flaws, but overall it still packs a punch, and should keep “versus” players occupied until Infinity Ward announces the next iteration of the series. In the meantime, Treyarch has created an incredible experience on top of the already solid COD4 cornerstone. While some design choices and oversights may distract you for a moment, there is enough great content to tide over your disdain. Visuals are still gorgeous (I think they topped COD4’s explosions), gore is fairly excessive but realistic in effect, and the sound quality helps immerse the player. Controls are familiar and spot-on once again.

In essence, World at War borrows heavily and expands on several other games, and to be honest: it works. This is not the ultimate war experience nor the best co-op game you’ll play this season…but it’s a good game, hands down.