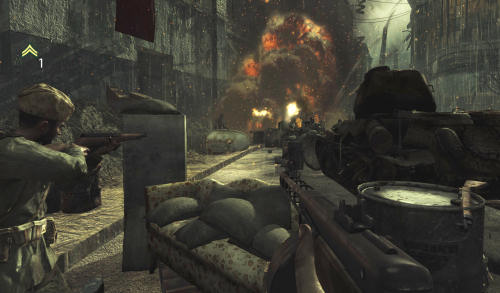 While there were moans and groans as soon as it was announced CoD5 would go back to the great WW, the second 4 player co-op was announced my moaning ceased.  And while a great co-op experience like Gears of War 2 may have spoiled me a bit, what Call of Duty: World at War offers is a solid co-op experience with plenty of replayability.

The competitive co-op mode is completely addictive, and in fact, when I went back to play some single player (blasphemy) I missed the little scores ticking off on the killing of bad guys.  Like Jim said, if you take the zombie mode for what it is, it's extremely satisfying and tense.  It forces players to work together through gameplay, rather than forced mechanics, and when everyone is clicking on all cylinders it's an exhilerating experience.

In the end the co-op campaign is more fun, while the single player experience is a bit more rewarding.  While I would have loved to see Treyarch tie up a few loose ends in terms of simply making everything a seamless process, what is offered is satisfying.  If anything it sets the framework for cooperative play in the Call of Duty series, and I can only imagine what's to come from future titles.

*Note - Our review is based on the Xbox 360 version of the game.  We will have a review of the Wii version later.