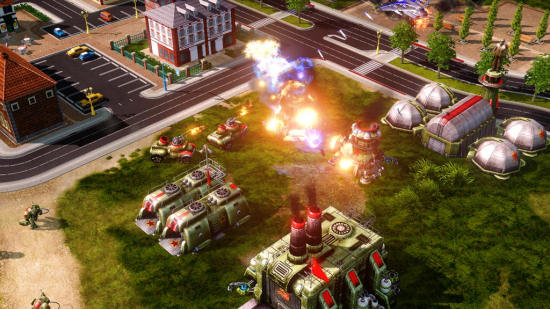 While drop-in and drop out play for an RTS would be difficult, you'll get something about as close as possible with Red Alert 3.  Between every mission you are given the option to play in single player or co-op, and if you choose the latter you can easily invite your friend via your Xbox Live (360) or In-Game friends list (PC).  Despite the single player option, you'll quickly discover Red Alert 3 was designed to be played with a real life person, not some fictitious co-commander.

Co-op adds a ton of depth to an RTS, and really opens up the possibilities of how to complete a mission.  There's a great variety of missions, and while it may boil down to "kill everything that moves," certain objectives require finesse to complete them.  Red Alert 3 even throws a few wrinkles at you during missions by limiting what and who each respective commander can build.  It does feel forced at times, but the missions allow and require lots of teamwork.  Whether it's taking strategic points, fortifying your friend's base, or launching a squad of war bears through the air for support in a battle - you'll find a new way to work together with every play through.  Communication needs to be constant and quick, and it can sometime be overwhelming trying to manage your base as well as decide what you may need from your partner. 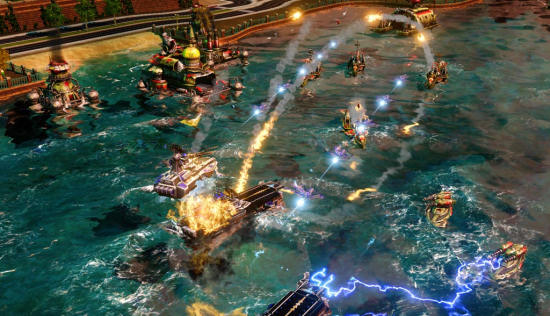 At certain points you will find the limitations of the game a bit too much, as there's simply no way to bail out your buddy.  For instance, one missions had one commander taking Tanya and some spies to destroy some buildings on an island.  The other commander meanwhile is fending off waves of attack.  With only Tanya and the Spies at my disposal, it made things incredibly difficult.  Our solution?  Send down a few troops to run distraction and sneak in behind enemy lines.  Unfortunately the game wouldn't allow the co-commander to build any amphibious friendly units, thereby creating an artificial difficulty barrier.   It's not a game breaker, but we would have loved to see a more "open world" style available.

Red Alert 3 is an ambitious game through and through.  There's a ton of content here for your $50.  In fact, I reckon you'll get almost a full 20 hours of playtime to complete all three campaigns.  The addition of cooperative play really changes the dynamic of the RTS, and as breathed new life into the genre.  It'll be interesting to see how many other titles follow suit.

The Co-Op Experience:  A traditional RTS with some co-op flair.  Every mission is designed from the ground-up with co-operative gameplay in mind. Join forces and strategize with friends online or join forces with nine AI commanders, three for each faction, all of whom have their own unique personality and style of play that might come in handy depending on the situation. 6 players can play skirmish mode against AI opponents via LAN, but the campaign mode is only available via the internet.