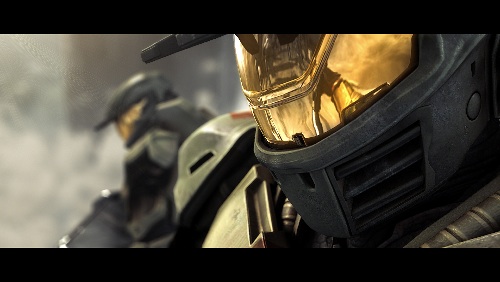 Attaching the word Halo to anything seems to print money for Microsoft, but it was something of a surprise to see the game Halo Wars on Microsoft's game menu. Strategy games are never big sellers, certainly not to the caliber of a first person shooter, but Microsoft chose RTS veteran (and now closed) developer Ensemble Studios to create the game. Set 20 years before the events of Halo: Combat Evolved, Halo Wars follows the story of Sargent Forge as the humans battle the Covenant. But when the Humans discover what the Covenant are actually doing on a remote planet, they realize that it's a stop at all costs type scenario. While the story lacks that certain mystical overtone that draws people into the Halo universe, there are plenty of moments where players can't help but smile. One thing the Halo games always had was strong co-op gameplay, something most strategy games are lacking. So it was a surprise to us to see Halo Wars not only had co-op, but had co-op throughout the entire campaign.

Consoles have never been a strong point for RTS games, most players find themselves fighting the controller. The problem has traditionally been adapting a PC RTS to a console. Halo Wars looks to solve this by completely taking a PC out of the equation. What you find is a control system that while similar to most console RTS games, has a lot of a small tweaks that simply make it feel more like a console game. You'll find radial menus to aid in base building, and quick triggers to select all your units on the screen or on the entire map.

There's two standout control pieces that I think set Halo Wars apart. The first is the alternate attack or Y button. Units can attack simply by hitting X on an enemy, but there's also a limited and more powerful alternate attack by pressing Y. For instance your troops may throw grenades, or you Spartan may jack a vehicle. This subtle addition really brings the player down to the battlefield and makes the game feel more action oriented. The other control addition is the sub select menu, which is a blue row of units that sits at the bottom of the screen. What this does it allows players a quick way to sub-select unit types while still retaining control of all troops. For instance I can select all units with LB and then use the right trigger to select just my Warthogs - then quickly select a group of grunts and hit Y. What this does is eliminates the hunt and pick of choosing a certain unit out of crowded screen.