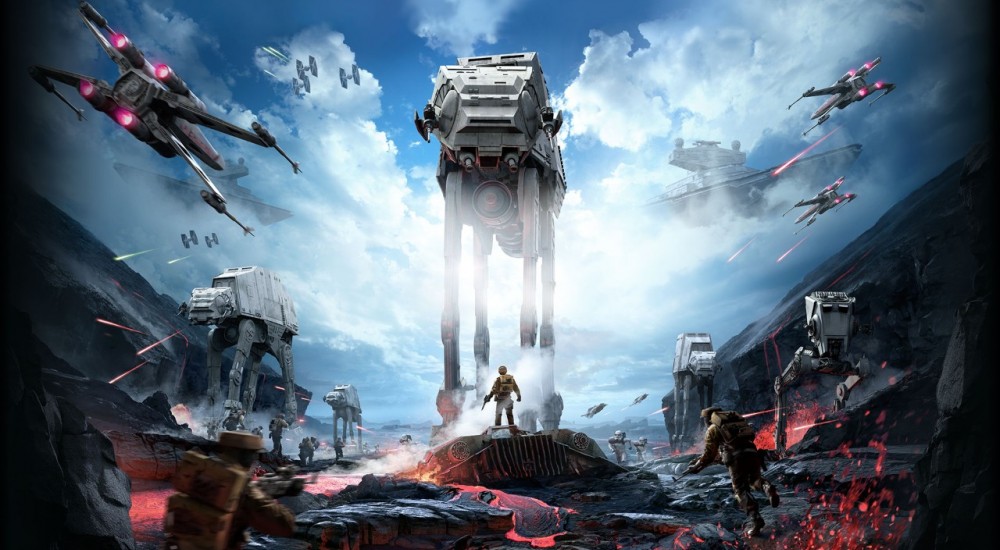 Star Wars Battlefront leaves an excellent first impression. The commercials for the game compared the game to reliving your childhood of playing with Star Wars action figures & toys, and they pretty much deliver on that promise. The graphical fidelity in this game reaches a level of visual authenticity that no prior Star Wars game has been able to match. Hell, even the animations of characters and their abilities seem ripped straight from the films.

Battlefront tries to give a little something for every type of Star Wars fan. While most of the time you'll be a basic Rebel or Imperial grunt, you can take control of many of the iconic heroes of the Star Wars universe. Rebel players can call up on the aid of Luke Skywalker, Princess Leia or Han Solo, while Imperial players can summon Darth Vader, Emperor Palpatine, or Boba Fett. Clearly, the Imperial side wins this battle. (My backpack's got jets.)

Heroes are appropriately empowering. Normal players are cut down with relative ease, and deflecting blaster fire to take down other people is a total hoot. It's a bit weird seeing the Emperor move around the field so quickly, but shooting lightning into fools never gets old. You can also take control of many of the iconic Star Wars vehicles, such as X-Wings, TIE Fighters, AT-STs, and even the Millennium Falcon. Unlike heroes, I never quite got comfortable with the vehicle controls, but they're a fun diversion.

There are many competitive multiplayer modes in Battlefront, but two are the stars of the show: Supremacy and Walker Assault. Both feature forty players, all of the Heroes, vehicles, and with respawns being nigh-instantaneous, they really do a good job in capturing the scale of iconic Star Wars battles.

In Supremacy, both sides engage in a bit of tug-of-war over five control points. Capture one point and you'll be encouraged to hold the most recent one while trying to capture the next. Lose it, and you'll have to fall back and defend the previous one in the chain. Walker Assault has the Imperial side guarding AT-AT walkers as they advance on rebel objectives, whilst the Rebels must destroy the AT-AT via Y-Wing to win.

There are a few Hero-centric modes as well. Hero Hunt starts with a random player as a Hero, while the other nine players must track them down. Whoever got the last hit on the Hero becomes one. And so on. Heroes vs. Villains pits all heroes on a side against each other, while the remainder of the players are generic Stormtroopers. Whichever side loses all three of their heroes first forfeits the round, and there are at least five rounds. This is also the best way for your average player to get time as a Hero. Fighter Squadron is an interesting mode that puts all players into aerial vehicles for some light dogfighting action. If you ever wanted to pilot the Millennium Falcon and blow TIE Fighters out of the sky, this is your mode. There are also more standard modes like team deathmatch (Blast), capture the flag (Cargo), and zone control (Droid Run/Drop Zone), if that's your thing.

Playing all of these modes earns your experience for your overall player level, and credits to unlock new blasters, cosmetic options, and Star Cards to equip. Star Cards represent gear and abilities you can bring into battle. Equip a Thermal Detonator card, and you can chuck one out every few seconds. My personal favorite is the Jetpack, since it allows you to really get the drop on folks. The ‘top' card you equip in your Star Card hand takes a ‘charge' to use, and your number of charges is persistent throughout your matches.

Power up items also spawn throughout the levels. These are generally more powerful than what you can get from your Star Cards, such has a one-use rocket launcher, several turrets, heavy blaster emplacements, and squad shields. In Supremacy or Walker Assault, this is also how you gain access to vehicles and Hero characters.

I wish the power up system was a little more graceful. With the game's focus on extreme Star Wars realism, a bunch of spinning Rebel/Imperial symbols floating around in the world seem incongruous. It's not like DICE doesn't already have a series that handles this stuff or anything. And speaking of Battlefield, it seems slightly odd that there isn't some variant of Conquest in Battlefront.