Another big draw for any nostalgic release is the addition of leaderboards.  For older gamers, who grew up lusting over the high scores on beloved arcade game lists, leaderboards are a great feature.  If anything, the leaderboards are better, since the competition for high scores is global, not localized to one machine.  And of course, bragging rights among friends are another reason why leaderboards are fun.  Final Fight Double Impact supports achievements and trophies, as you would expect.  The implementation of these is excellent, with helpful tooltips popping up as you play so you can track your progress.  This is one of my favorite features in any game, and it's nice to see it in this release.  The achievements aren't quite as creative as I'd like, but they do reward replays, which adds to longevity, as does a good array of unlockables like concept art and comics.

One of the better features of Final Fight Double Impact is the seamless co-op play.  Other players can join in at any time, either online or locally.  It's nice to see both types of co-op represented, so fans of couch co-op or those who prefer to play with friends at a distance can each be happy.  Unfortunately, neither Final Fight nor Magic Sword have major co-op elements like revival or combined attacks; it's simply simultaneous multiplayer.  Friendly fire was a bit of an issue in Final Fight, but it wasn't so frustrating as to ruin the experience.  Co-op is further encouraged by a couple of the achievements and trophies. 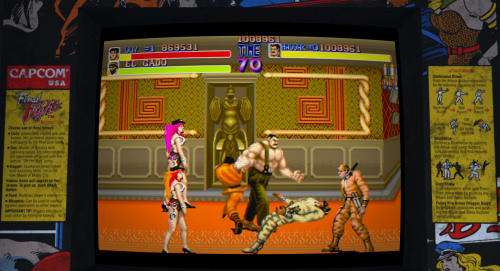 If there were a textbook on how to release a classic arcade game on modern gaming networks, Final Fight Double Impact would be it.  It might seem overpriced at $10, but when you consider the inclusion of both Final Fight and Magic Sword, I think it's worth it, especially compared to similar releases.  Both games are solid co-op experiences in their own right, contrast well with one another, and are a nice snapshot of what state of the art gaming was twenty years ago.  Nifty modern innovations, particularly the slick presentation and multiple display options, make Final Fight Double Impact competitive alongside the best that XBLA and PSN have to offer; it's a classic release done right, and I for one am glad to see a vintage game get the deluxe treatment.