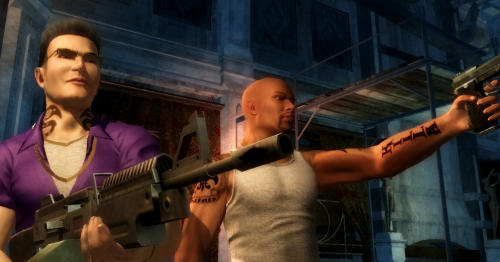 Saints Row 2 in co-op mode is loads of fun  and experiences that are very over the top in their presentation.  A few things here and there bring the enjoyment of co-op play down by at least a tad. The beauty of co-op in this game is that you can drop in and out of it whenever you want. The host of the partnership pulls the guest into their game world. You come in with the same amount of money and all the guns, ammo and weapons that you had in your world. Once in the game you can do whatever you want. You can join forces against the rival gangs or you can both go off on your own and do whatever you want. The world is basically your oyster, much like it is on the single player side.

My experience with co-op was with Psykoboy2 (Scott Benton) from Colony of Gamers and radio host of In-Game Chat.  I joined his game and it was obvious as soon as I came into his world that he was farther than I was with icons I had not seen on my map. First thing we did was hop into a car and start driving around. I pulled into the driver’s seat and we were met with the first problem in co-op. Scott could choose a waypoint or I could, but only the waypoint maker could see their GPS line on the mini-map. So, Scott set the waypoint and I started driving with him giving me directions of where to go. I noted to him that this felt like the blind leading the deaf with us flying all over and missing turns. Yes, in hindsight I could have figured out what waypoint he had chosen and done so myself, but the crazy driving was part of the fun. From that point on we decided unless it was a hairy situation where we need to get the heck out we’d have Scott drive everywhere.

Next up was one of the game's whacky activities, Septic Avenger. Basically what this activity entails is you taking control of a sewage truck and shooting liquid crap onto targets.  This is one of the activities added in this sequel and it is very over the top, but also very fun to play since the sewage truck seems pretty tough.  This was Scott’s first experience with it, while I had already run through a couple on my own. We quickly found out that only Scott could control the stopping of the sewage truck with the left trigger, but we could both fire crap at the targets, making things that much easier to reach the dollar amounts. We had a ton of fun shooting crap all over the targets and spraying police cars full of it. Once we finished a level of it, we decided to find something else to occupy our time with.