In general, I've found that the Guitar Hero note charts are more difficult than those of Rock Band.  That's good or bad depending on what you prefer.  One thing that annoys me about the difficulty is that many times, notes are plugged in to make it tough, even though they aren't in the music.  Rock Band's note tracks are easier, certainly, but to me they feel more authentic, and less video-gamey, if I can use that term.  It's apples to oranges, in a way, but I prefer the charts that the folks at Harmonix make.

The customization options available are indeed deep.  Guitar Hero World Tour has the advantage over Rock Band here, mainly due to the large number of options available for instruments.  Another nice aspect is the increased options for faces; instead of picking a model, you can alter any face with sliders.  If you're a fan of the old Guitar Hero models, don't fret (pun intended): favorites like Axel Steel and Lars Umlaut are available for use.  Also, actual rockers like Ozzy Osbourne and Billy Corgan show up, which is pretty sweet.

In the days leading up to Guitar Hero World Tour's launch, much was made of the custom song making mode, GHTunes, and for good reason.  This is the one thing that Activision brings to the table that Harmonix does not, so of course, it is important.  I was totally excited when I heard about it, as a former music major.  Dreams of rocking out to the Transformers theme song filled my head.  (Yes, I know that's a bit sad.)  I downloaded the top rated user created songs the night we got the game, and checked them each out.  To my disappointment, the quality of these songs was quite poor.  I'm not talking about being poorly composed, though, I'm talking about how they sound.  They sound like MIDI music from video games of yore.  Others have compared GHTunes songs to cell phone songs, but I'd go so far as to say I've heard greeting cards that sound better.  After listening to three of these songs, I pretty much wrote the music creator off as a major feature.  It's a toy you may play around with for a while, no more.  I feel like the gaming community was mislead a bit about GHTunes. 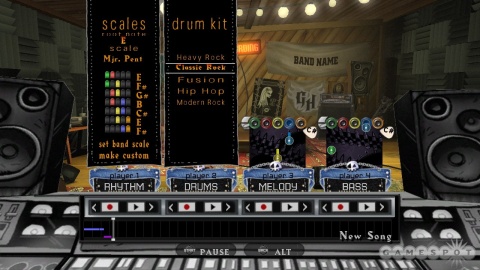 Beginner mode is a nice addition.  If you select beginner, for any instrument, all you have to do is hit any drum, strum any note, or make any sound when a bar similar to that of the bass pedal or open note bass rolls by.  It's painfully easy, but a nice inclusion nonetheless.  My seven year old absolutely loved it, whereas he often struggles and gets frustrated on Easy in RB2.  It's odd to see such a casual friendly feature in the typically more extreme Guitar Hero franchise, but it's still welcome.

Finally, we come to the co-op.  As I said earlier, both Rock Band and Guitar Hero World Tour deliver a unique co-op experience.  The feeling of teamwork is quite strong in these games, where each part works together, literally in harmony.  The goal here is feeling like you're really in a band, and both games do it well.  There are a few areas where the feeling of co-op isn't quite as strong for GH WT, unfortunately, as it is for RB.  The way bands are set up is odd, for one thing; each player must create their own band, and then one player gets to be the band leader, and everyone plays as a member of that band.  It's a bit backward, and a step back from even the first Rock Band.  In GH WT, all players share a star power meter.  There is no saving up your own star power to help out a friend in need; if they need it, they use the collective pool.  A bit of the co-op feeling is lost as a result.  When you use star power to save a friend in the red, or who has just failed out, in Rock Band, that's true cooperation.

The real deal breaker for Guitar Hero World Tour's co-op is the fact that if one member of the band fails, it's over for everyone.  No three strikes and you're out here, it's one and done.  This is incredibly frustrating, especially if you are playing a song you don't know well.  You can deploy the shared star power, to help get someone through a tricky section, but you really have to watch everyone else's screen to be able to do that.  As you can imagine, that's not easy to do when you're busy doing your own thing.  I also miss the "big rock finish", where everyone goes nuts, and tries to hit that last note at the same time for a big fat point bonus.  That's co-op at its best, in my opinion, and there is no equivalent in Guitar Hero, unless you perhaps count the notifiers that pop up to show how many notes the band has hit in a row. 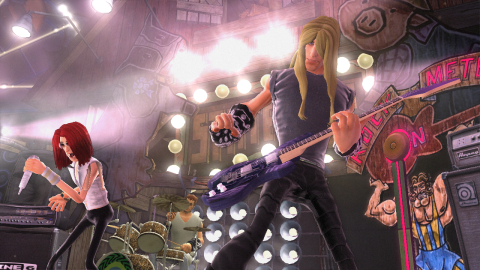 So, what's the final verdict?  Guitar Hero is a great game, for sure.  It surpasses the competition when it comes to instruments;RedOctane makes some nice hardware.  A very strong song list is marred only by the overlap with Rock Band.  Customization for characters is very well done.  Custom songs are a fair addition, but a bit shallow.  On the other hand, Guitar Hero World Tour falls short in the co-op features.  "One and done" failure is just a shame.  I have to give Rock Band the edge when it comes to co-op, but GH WT has it's own appeal for other reasons.  Like I said, both are very, very good games, and you can't go wrong either way.