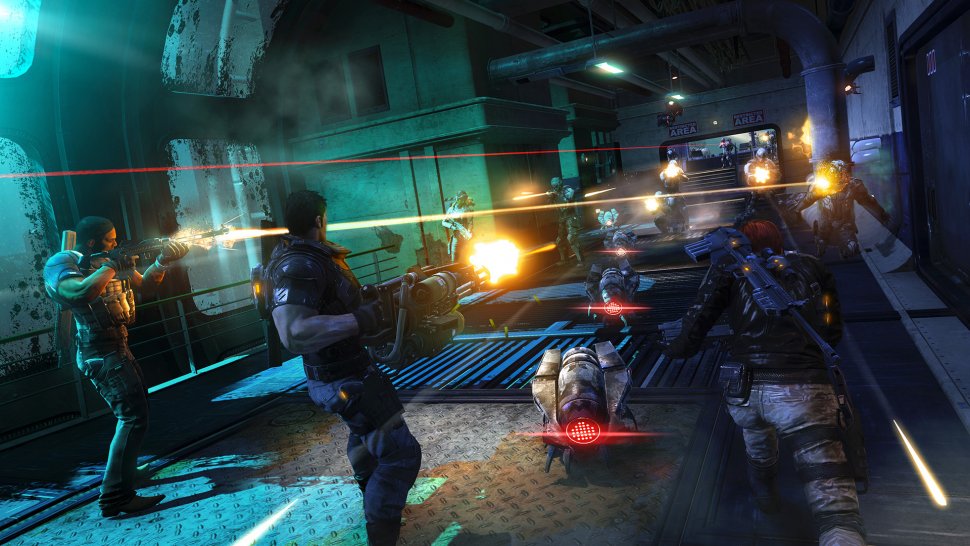 The latest trailer for Insomniac's cooperative shooter, Fuse, allows us to see things from the Raven leaders' point of view. They're simple people, really.-simple people running a technologically advanced paramilitary organization bent on global domination. The leaders of this force are trying to capture the Fuse substance to reshape the world. Of course, their vision of this new world is one of profiteering, toppled governments, terror, and supplication.

That's where Overstrike 9 comes in.

Yup. Looks like a decent shooter. Man, I do enjoy shooting things.

The very first thing we decided was to make a great four-player cooperative game that was also just as much fun for an individual who doesn’t want to play co-op. We knew that was going to be a tough challenge because most games are good at one or the other. Furthermore, we knew that we’d be biting off a lot by trying to make four individual, very unique characters with four very different weapons work together.

We believe gamers are becoming more and more connected, more and more social. Despite the fact that a lot of us still play by ourselves in a dark room, a lot of us also like to play with friends. Over this generation I think this trend has been accelerating. The consoles from the very beginning were connected and… the games have brought about great matchmaking, and continued to push forward ideas like drop-in/drop-out co-op. We don’t think that trend is going to slow down. At all. By delivering features for co-op that we believe raise the bar, we are simply flexing (our) muscles as a company focused on multiplayer co-op game design.

The biggest challenge was making sure that the four multi-faceted weapons worked well together. It’s a simple thing to say, but practically, it was brutally complex. At the heart of that complexity are these very different weapons and the ways they all interact together. Getting to the point where we actually felt that each of the weapons stood on their own as a fun experience but could be combined took a lot of work and re-work....

Then, on top of that, making sure these character archetypes that we were developing – Dalton as the tank, Izzy as the healer/crowd-controller, Nya as the AoE/stealth specialist, and Jacob as the distant damage dealer [and] trap expert – getting those archetypes right so that they were clearly communicated by the weapons that you pick up early was hard.

It looks like Insomniac has a handle on this whole co-op gaming thing. Hopefully Fuse will rise above the rather dull selection of shooters we've dealing with in 2013.

Fuse supports two player local co-op and four player online co-op. It will launch on May 28th for the Xbox 360 and PlayStation 3.