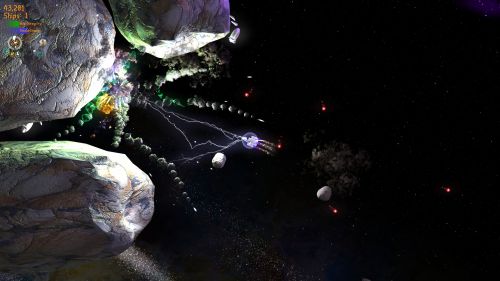 Late last year we sat down with Terry Welsh, the one man development team of Really Slick, to talk about his retro cave shooter, Retrobooster. The game places you in the shoes of a pilot (or pilots, if playing cooperatively) who's the last best hop to fight off the horde of invading aliens and save the galaxy. This isn't your typical twin-stick shooter, though, as Terry's worked hard to get the physics behind your space flight just right. That means Newton's First Law of Motion is in full effect as you'll be having to balance your thrust and propulsion to avoid running into everything. He's the right man for the job, too, as he once worked at NASA constructing flight simulators.

In addition to the usual flying and shooting one would expect, Terry's also worked a few puzzles into the game to further challenge your mind and reflexes. These range from flying fast enough/well enough to get past an obstacle, interacting with certain objects in the environment to trigger doors/portals, and what he calls "emergent" puzzles. The latter are built off "unintended game mechanics created by the interaction of game elements." Yeah, I'm not following all of that either, but it sounds cool.

Terry recently demoed his creation to the public at the Indie Press Day in San Francisco. VG247.com captured some of the gamplay footage, along with a running commentary from Terry explaining the features and mechanics behind everything.

Retrobooster currently doesn't have a set release date, but you can check out a demo of the game from the Really Slick website. If you like what you see, head over to its Steam Greenlight page to give a little support.