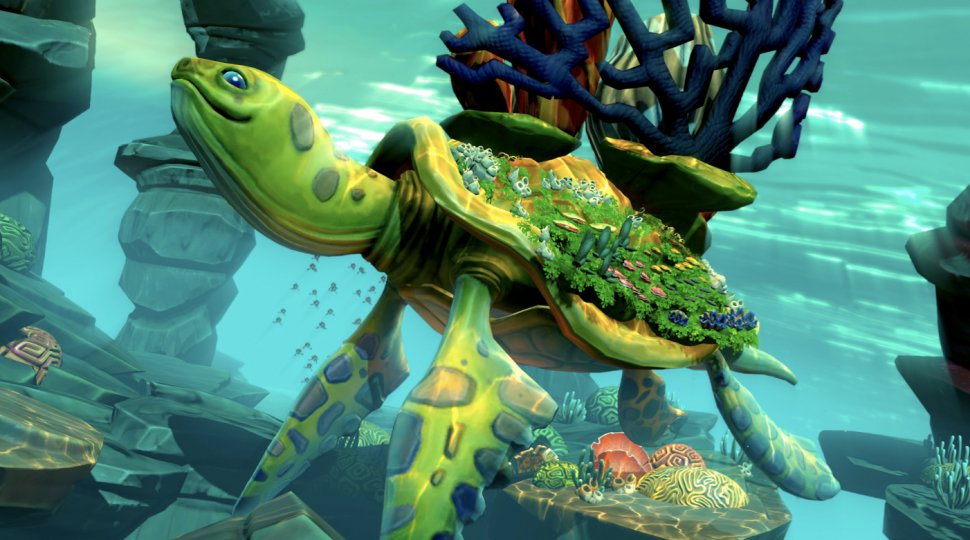 After my Disney Infinity preview, I was treated to an in-theater demo of Harmonix' upcoming Fantasia: Music Evolved. Now, I had heard that this was going to be a game based on the classic Fantasia films, but with the inclusion of modern music, which seemed to clash with the theme. I went in skeptical, but Harmonix decided to get experimental on me and now I'm warming up to the idea.

Players are given the opportunity to work in Yen Sid's laboratory (you know him as the titular Sorcerer in The Sorcerer's Apprentice, or if you're a Kingdom Hearts fan you'll already be introduced), to breathe life back into the world. We were shown an area called The Shoals, which was a tranquil, yet dark corner of the ocean. Interacting with the environment via the Kinect roused its citizens slightly, but it wasn't until we entered a rift in the environment that Fantasia's true gameplay began. The rift we opened up contained Queen's Bohemian Rhapsody, which I approve of.

At its core, Fantasia has players pulling their best Sorcerer's Apprentice impression and conducting  patterns set to popular music. The twist is that at certain points in the song, you select an element about the music to change. For instance, you might take Bohemian Rhapsody and replace the instruments with a symphony, or simply replace the guitar work with an acoustic accompaniment. There were other, more drastic changes, such as replacing the drum track with heavy metal-style blast beats.

Essentially, you can tweak each song to your own liking through the branching paths that Fantasia presents you, meaning that each performance can be as different as you want. After completing a song, the musical energy you build up is used to breathe new life back into the environment, and echoes of the song will be woven into the ambient music. In our demo, a sea turtle arrived, with a host of clams along for the ride.

Interacting with the clams revealed that each one was actually tied to a particular drum sound, and as the player 'drew' patterns around, he created drum fills that the game echoed back at him. When the player was satisfied with his creation, he returned to the shoals to find that his new drum pattern was being woven into the ambient music as well.

At the end of the presentation, Harmonix' Eric Pope said that the game would contain a two-player mode. Considering most of their output as of late has included cooperative play, I asked him to clarify whether it was competitive or co-op. Unfortunately his answer was that they don't actually know - they're still playing around with systems and haven't determined what the final modes will be. Here's hoping. Check out its announcement trailer:

Fantasia: Music Evolved will be available sometime in 2014 for Xbox 360 and Xbox One. It will require the Kinect sensor to play.