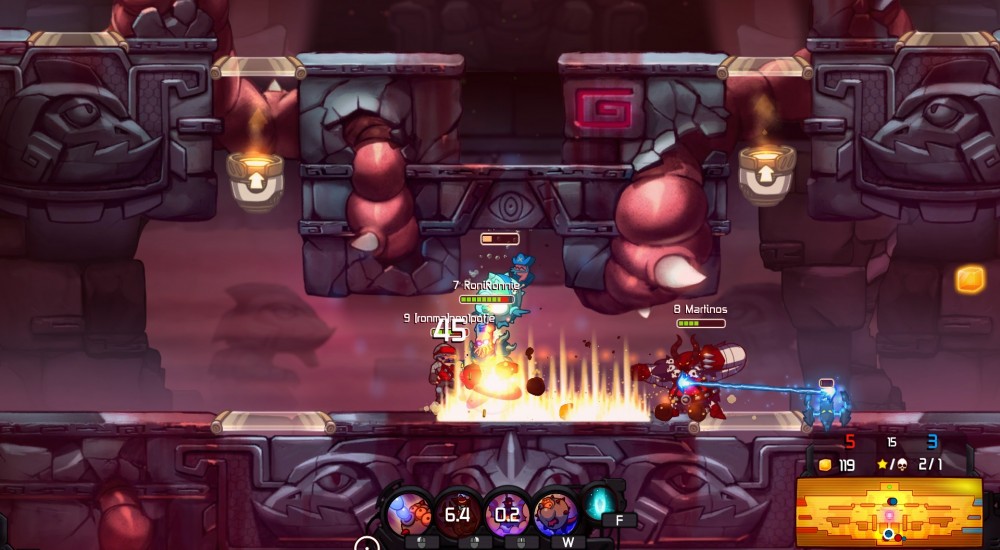 The Awesomenauts community can now relax a bit in knowing that Awesomenauts Assemble has officially received its release date on PS4, and it's much sooner than we previously thought!

Releasing next week on March 4th, Awesomenauts Assemble will finally be available for purchase on the PlayStation Network Store. Again, this game will include all the up to date features and patches the PC version has, which is substantially more than what the Xbox 360 version ever received. This includes a roster of 16 characters to choose from, 4 stages to do battle on, and a plethora of fixes and improvements to make the experience that much more enjoyable. The game will only cost $10, which is a steal if you ask us. Even better, the latest patch on PC, Patch 2.2, just went live today too! It would more than likely be included on the PS4 version as well. Some annoying glitches like the "droid sliding" and other features, like being able to join a custom game lobby without an invite, have been added to polish Awesomenauts even further. However, the more intriguing information lies on the new character buffs and nerfs that have been issued. Here is the full list of notes, so make sure to read up and plan ahead for your future matchmaking/co-op play sessions:

Various
-The game now collects balancing metrics to help us do better balancing patches in the future. We only store aggregated anonymous data, so no private data or data-per-player is stored
-Improved anti-cheat
-Option for ”Allow join without invite” in Custom Games is now visible for clients (but not editable)
-In the character select non-Starstorm owners can now properly see if Ted is selected by another player
-Added botnames for Kickstarter backers (Thorium Tier and up)
-Added Special Thanks to credits for Kickstarter backers (Gold Tier and up)
-Added Very Awesome Thanks to credits for Kickstarter backers (Awesomantium Tier and up)
-Added the instrumental version of the Awesomenauts theme song to the soundtrack DLC (karaoke GOGOGO!)
-Fixed a couple of text errors in the menus

Various gameplay
-Fixed that the joystick crosshair for player 2 was also visible on the screen for player 1
-The infamous “sliding bug” is fixed (This is the bug that in some cases nauts could drag other nauts, creeps and droids along with them.)
-Fixed that for some characters (probably Voltar, Genji and Swiggins) downjump and jump would sometimes not work when standing on a platform that moves down.
-Bots now take 20% less damage on every difficulty instead of an increasing percentage per difficulty.
-Fixed an issue where Vinnie could tank the top turrets in Aiguillon without taking damage.
-Killing a Solar boss now gives 500 hp instead of 2000 hp

Genji
-Stormdrum glitch where two clouds would spawn is now fixed
-Main attack glitch where you would be able to hit 3 times is now also fixed
-His character select description now states that he can hover after jumping
-Jagra eggs, Heal effect when cocooning an enemy now only triggers after purchasing jagra eggs
-Cocoon, Increased projectile speed and range
-The last pieridae transformae description now states information on the hummingbird droid

Ted
-Reloadtime of shotgun increased from 1.7s to 2s
-Shotgun shells cap reduced from 5 to 4
-Shotgun shells now also reload during machine gun mode stance
-Many bugs related to switching between weapons and using Stimpack in combination with Shotgun have been fixed
-Airstrike and Stimpack descriptions now state when they are available
-Shotgun description now states the base knockback
-Machinegun base damage increased from 3 to 4
-Stimpack's animation lenght reduced by 0.2 sec

Yuri
-Fixed that on Linux, Mines would sometimes end up in a different position than on other platforms (this only happened very rarely)
-Laser description now states the pulling effect on pickups
-Laser description now states the charging time to next damage value
-Space time continuity device cc immunity now only works for Yuri
-Toaster timer time reduced from 4s to 3s
-Flash forward price increased from 180 to 220 Solar

Awesomenauts Assemble is a 3-player online/local co-op game with fantastic multiplayer options and split-screen modes; available only on PS4. The original Awesomenauts can be found on PC and Xbox 360.