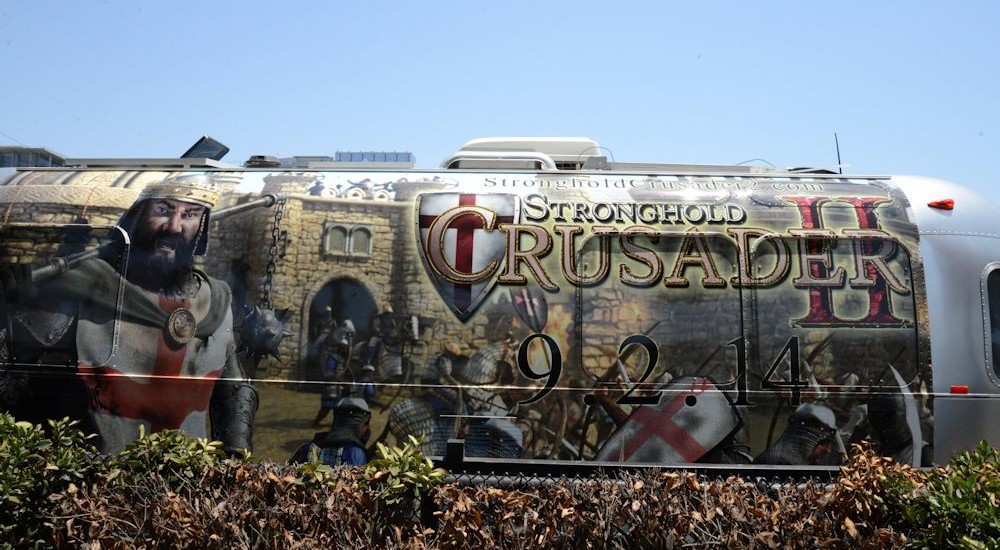 Last year I fondly remember seeing the Stronghold Crusader 2 airstream trailer across the street from E3. "Huh, that's a smart way to promote your game," I thought. Away from the hustle and chaos that is the LA Convention Center. As I sat with the folks from Firefly Studios and got a demo of the latest build of the game inside the same trailer I instantly became intrigued once again, not by the promotion but by the game itself.

This year the team is back with the latest and near final build of Stronghold Crusader 2. The game is about three months away from release and is currently in a feature complete stage. Firefly Studios iplans to hold a beta and continue to add polish right up until release. The folks seemed really concerned with polishing the game, getting those little details just right.

From what was shown to me, the game is already looking incredibly polished.

The first thing that stood out to me is the attention to detail within the game itself. The texture detail on the terrain and buildings are top notch, crisp colors and depth that pops off the screen. Little people go about their jobs; chopping wood, trading in the market, carrying items around. The little animations are fluid and convey the sense you are looking in on a tiny world brimming with life that could walk from your monitor onto your desk at anytime.

Ironically as I began to write down in my notes - "reminds me of Caesar 3" - as I chatted with the Firefly rep, he asked - "Did you ever play the Caesar series? My bosses helped to created that." Those games felt and looked very similar to what Stronghold Crusader 2 was showcasing. Busy bustling villages combined with RTS style combat.

I watched as the a fortress was slowly built to protect the lifelike little people. Troops were trained and bought, with options to hire mercenaries for quick fixes or utilizing the game's economy to recruit Crusaders to your army. On the opposite side of the wall was Richard the Lionheart, who preferred close up combat with his troops. Each opposing AI "hero" will have their own personality which will govern their strategy against the players. I watched as Richard attempted a fruitless attack, his little troops banging on the castle walls trying to bring it down while we built pots filled with oil and ignited them right in front of their recinforcements. It was a slaughter.

It was onto the counter attack, with several trebuchets built to tear down Richard's walls with ease. Or so I thought. Instead they were loaded up with diseased lions and cows and launched into the villages, exploding into tasty giblets on impact, and spreading a horrible sickness and disrupting the flow of reinforcements to the Lion Hearted faithful.  Soon the walls were breached and the conquest was complete. Richard foolishly left his castle and charged the troops falling...valiantly. Stronghold Cruasader 2 will feature two forms of co-op play. A mix of up to eight players can each control their own keep and team up against various number of AI players. The more interesting co-op mode will be a single team of two players against an AI player where folks split duties throughout the village and keep. While the game won't launch with a co-op-able campaign, Firefly does plan to release that as an option shortly after launch.

I came away from my time with Stronghold Cruasder 2 instantly impresssed. Having only dabbled in the previous games in the series, I can see myself spending a lot of time with the latest. I spent long nights in college playing Caesar 3, and if Crusader 2 can scratch that itch, I may be satisfied once again very soon - and this time with a friend by my side.